The image above is the most detailed sent to Earth by NASA's Spirit rover which has just marked it's 1000th day on Mars (that's Martian day).
It took a total of 1449 individual images which is 500 megabytes of raw data to make up what is now called the McMurdo Panorama.
The little rover took the images over a month while waiting for the Martian winter to pass and the sun to come back to strength to power up the solar panels.
The image shows the view of a part of the Columbia Hills region and the tracks it made can be seen winding off to the left. Dark volcanic rocks litter the area.
In about a month the rover will start to drive to a formation called Home Plate which scientists are hoping will be the remains of an explosive volcanic eruption. 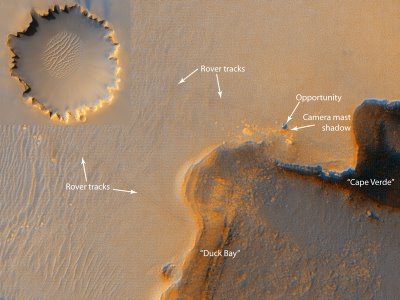 Meanwhile on the other side of the planet, Spirit's twin, Opportunity has reached the 800 metre wide Victoria Crater (image left corner). This crater is wider and deeper, at least 60 metres, than any studied on Mars and should give scientists a look at the much older rock layers at the bottom. The Eagle Crater gave geologists 0.5 metres of layered rock and Endurance Crater gave 7 metres of layers.

Opportunity beamed back the first colour images while overhead the Mars Reconnaissance Orbiter snapped pictures of the crater and the rover from an altitude of 275 kilometres. It has taken the little rover 21 months to cross the Martian plains to reach this crater. Scientists want Opportunity to descend into the crater so it will travel around the rim to look for a suitable way down. The full panoramic image is now being radioed back to Earth but that will be interrrupted as we orbit behind the sun.

The rovers have already run 10 times more than their expected mission time. Scientists thought the Martian dust would cover up the solar panels but now one theory is that the Martian winds have blown this away. The rovers are showing signs of wear with Opportunity having one of its four steering mechanisms jammed and a weakened instrument arm joint.

Call me an old romantic but I like to think the Martians are sneaking out at night to tighten up the rubber bands and give them a quick push start in the morning. And what is with the lame names, 'Duck Bay', 'Cape Verde' or 'Cabo Frio'. Doesn't anyone at mission control read Edgar Rice Burroughs, Arthur C. Clarke or Asimov? Anyhow the images are brilliant.