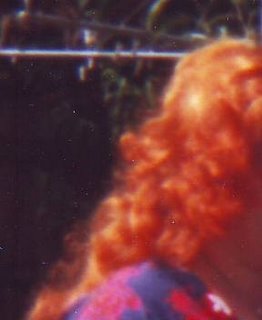 I'm still trying to get dates straight but I didn't have straight hair and boy, was it red.

The first year of my forgetfulness has been revealed. My Mother had a lump removed from her breast and I found one in mine but both were benign. She then had a breast reduction and she was never happier at not having to drag two bags of concrete around on her chest. I don't know how Pamela Anderson does it. She got over that and broke her leg. It didn't slow her down though, she was seen to mow the lawn with a plastic bag over the plaster. That's probably what caused her heart attack.

The heart attack caused suicidal depression which she neglected to mention to anyone. She said she used to watch the window for that red hair to go past and she'd feel as though she could get through the day. She finally told her doctor and two weeks on anti-depressants, she was raring to go.

Apart from riding my bicycle to Mum's everyday, what was I doing. I was looking after my kid, my sister's kid, three dogs, four cats, an incompetant husband and dealing with my father who was terrified something else would happen to mum. I found it very difficult to be an adult with him, I was still his little girl while my sister was his little mate. He found it very hard to show his feelings because of his childhood so to thank me he had a gift delivered in the mail. It was from Franklin Mint and a copy of one of Faberge's eggs on a chain. Nothing he did before or after ever came close to that gesture of thanks.

As I said in the comments earlier, I didn't forget, for the next five years I think I was suffering from post traumatic stress disorder. My sister said she was suffering from permanently being pissed. The Blight mostly just hid under a rock. So I think Dr. Watson, we have a solution to the mystery of the dreamings, nightmarings and panicpanicpanic, it's just the past coming back to bite me.

The dreams aren't reality; the reality is that you have traveled through all that and come out in one magnificent piece. You go, girl.

Wow! Is that really your hair? Its magnificent, I wish my hair was as stunning!
Isn't it funny how the woman are the tough old creatures! Your mum's a gutsy lady as are you for dealing with so much crap! (Ive always found the male crap the most wearing!)
Perhaps your sisters coping strategy, although bad for brain cells, was the most effective???

mm, post traumatic stress disorder. Funny really.. blokes seem to always suffer from "disorders" (as in ADHDD) but females only suffer "syndromes" (as in PMS). Curious.

Janet, there have been other bad times but either the devil or heaven doesn't want her.

It's been toned down quite a lot since then Zoe, not to mention shrinking. I used to use platinum blonde then titian red on top but the minute I changed I felt like me.

Davo, now I'm going to have to look up the difference in the two. Curiosity kills internet hours.