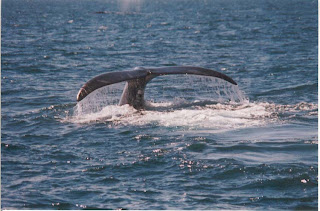 Whales are big and notoriously difficult to study in depth. With the Atlantic Right Whale population down to 350, researchers are trying to determine what is happening with their reproduction. In 1999 there were only four new calves in the population and only one in 2000 rising to 19 in 2006 but still not enough to ensure their survival. The causes of low birthrate can be anything from pollution by hormone disruptors, detergents or antifouling agents and one way they could be tested was by collecting whale faeces. From faeces researchers could determine sex, genotypes and hormone levels but find whale crap in an ocean isn't easy.

When the state of Washington banned hound hunting, the dogs were retrained to look for endangered species, ie. look for faeces then track them, but it was found that air sniffing dogs trained for explosives and narcotics were better. Detector dogs now help conserve animals from the Rocky Mountains to Brazil. The National Oceanographic and Atmospheric Administration provided a grant to see if the sniffer dogs could work at sea specifically in collecting whale crap.
It worked beautifully, the dogs sniffing out one load an hour compared to humans collecting one or two per day.

Fargo is a star, a 6 year old Rottweiler with an impressive resume. He was trained as a drug sniffer specialising in cocaine before moving to wildlife research. He has looked for bears, sniffed out illegal elephant tusks and spent time in the Mojave looking for desert tortoises. He then transferred to sea work with the whale researchers near the Bay of Fundy on the Canadian coast. His only problem was sea sickness. He wore an orange life vest and stood on the bow of the ship ready to catch a scent at anything up to a nautical mile. Humans have to get closer to smell the heady aroma of oil, crushed crustaceans and the sourness of whale.

The colour of the booty changes with the seasons and the prey. In Spring, it's bright red from the diet of fat-rich copepods. An Orca's crap, if you want to know, is more snotty green brown and just as aromatic. The sample is divided and posted to various laboratories for testing of marine biotoxins, protozoan parasites, hormone levels, DNA which can be matched to individual whales and fat levels for nutritional value. One of the tests showed paralytic shellfish poisoning, caused by eating shellfish contaminated with toxic algae. Dolmic acid from diatoms can cause seizures and coma and hundreds of Sea Lions have died in the Pacific from this. Then there are the protozoan parasites, Giardia and Cryptosporidium which the whales could be picking up from human and animal waste dumped in the oceans near large cities along the coast. Orcas, for instance, have the highest PCB levels ever recorded in any mammal.

While the whale research goes on, Fargo has move back to the Mojave Desert to locate bats.

Next time you see a 2 year old peeing in the shallows, don't sweat it, there are bigger things out there.
Posted by JahTeh at 3:01 pm

Holy crap, Robin, is that pea soup your swimming in or has a whale shat on you?

You know until I read about this I never thought of mammals or fish crapping in the sea. It seems so clean out there. Did you see Planet Earth last night? The sight of that Great White Shark leaping out of the water to grab the seal was spectacular.

I meant to edit and put this in,
PCB means polychorinated biphenyl and it's pathogenic and teratogenic.

Yeas, I saw that. It terrified me.