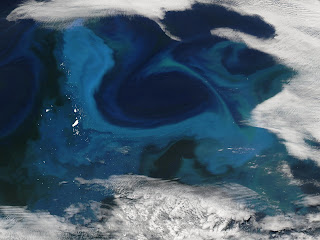 That is a true-colour image from NASA's Visible Earth project. It shows a phytoplankton bloom off South Georgia Island in January, 2004.

In November 2006, atmospheric scientists started to look at chemical emissions from ocean phytoplankton and how those chemicals could influence cloud formation and reduce the absorption of sunlight.

Discovery of this link came from efforts to explain the increased cloud cover over an area of the Southern Ocean where a phytoplankton bloom was occurring. This part of the world normally has relatively few particles around which cloud droplets can form. The hypothesis was that air borne particles produced by oxidation of the chemical isoprene which is emitted by the phytoplankton contributed to the doubling of cloud droplets.

Dimethyl sulfide (DMS) which is also emitted affects the formation of clouds by increasing the number of sulphate particles to form cloud droplets. Isoprene may enchance the affect of DMS by not only increasing the number and size of the particles but chemically attracting more moisture. The more droplets in clouds, the brighter they are and the more sunlight they reflect back into space.

The Southern Ocean is ideal for this type of study. It's largely untouched by pollution and has relatively steady temperatures and meteorological conditions during the seasons in which phytoplankton blooms. If this connection is confirmed by field studies it will be added to global climate modelling.

Atmospheric scientists believe that increased cloudiness partially mitigates the effects of global warming. Now they're looking at the role of oceanic biology on cloud formation and how it can alter the impact of greenhouse gases. They have to identify all the chemical components in the aerosols then estimate the amounts of these and other gases rising from the organics in the oceans.

I don't know why we are making so many plans to plant our ecological bootprints all over the solar system when we know so little about our own planet. It took a year before anyone knew about the Ayles ice shelf by looking at a satellite image, it's the same with phytoplankton and clouds, another satellite image, another new hypothesis. Scrap 'a man on Mars' mission and stick to Earth.
Posted by JahTeh at 4:43 pm

I too think it inadvisable for the likes of us to journey anywhere into the soloar system much less the universe..we are not all that sane at times

Beautiful image and I am in agreement with you (both).

Hear hear. The cost of space travel would go a long way to making earth a much better place.

Personally I think we'd be considered a plague and be wiped out.

I'm suspicious of why Presnit Bush wants a base on the moon so badly.

Zoe, so much to learn and too busy making war to teach.