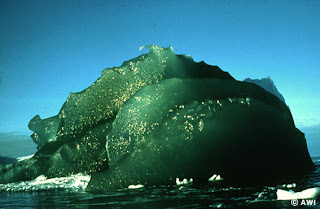 Lovely object isn't it? It's a green coloured iceberg and very rarely seen. Scientists haven't been able to agree on what gives the ice its green tinge. It's been attributed to layers of very fine sediment particles or optical effects but since a green iceberg stands out among white and blue icebergs under a variety of light conditions, the optical illusion theory hasn't stood up.

Green icebergs become visible after "normal" looking icebergs have capsized, displaying the layer of marine ice underneath. Marine ice forms the floating ice shelves the underneath of which is a nursery for algae which is another theory for the green colour.

Another polar mystery which might be solved given the increased disintegration of the ice shelves due to the warming of the Arctic and Antarctic oceans.

Wow, that's gorgeous. I never heard of them before.

I've added some more for you Laura and I have to say it was hard to unglue my fingers and give away the gem specimen even for a special gift.

Oh what a ripper! Never seen anything like it! Thanks JT!