I have been doing some cleaning, some putting away and some throwing out which could be the cause of the downpours we've been having. Start building the Ark now for when I start on the desk behind me. I don't think I've seen the surface of that in two years, I'll know by the date on the last science item I come across.

I was in two minds about keeping my order books from the craft market. I mean, do I really need reminding about freezing cold mornings and month to month deadlines. So I started to go through 15 years of making and selling. The amount and variety of the items I made almost sent me into shock. Did I ever sleep? I know I never did housework. Photographs show my loungeroom in a perpetual state of disgrace, the years are indistinguishable but I can tell the seasons according to slippers or thongs. 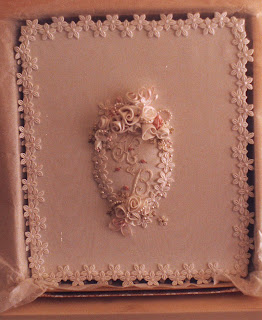 I found this photo of an idea I 'borrowed' from an American wedding book. I started craft long before the internet and blogs so the only way to stay ahead was to adapt an idea. If it was from America, I had 6 months to make it and sell it before it hit the Australian market and then it was all over red rover.

Wedding guest books are readily available now, along with ostrich feather fan pens but way back then, unobtainable except for those with big money. This was heavy cardboard, covered in taffeta moire, edged with guipure lace. I embroidered the initials and made the flowers. The first one had the signature pages attached until I had feed back about what boozy wedding guests could do to taffeta. After that I put in separate sheets of heavy embossed paper which circulated while the book stayed at the Bride's table.

When I look in wedding books these days, this seems so amateurish but back then it was inexpensive and personalized and girls kept coming back for more. The one photo I wish I did have but never thought to take was of the toasting goblets. Tall glasses with guipure flowers stuck to the glass, beaded and beribboned. I also made horseshoes until dressmakers realized how profitable it was to make one out of the wedding dress material. They never did quite match my tiny porcelain shoes covered in lace and beads. They've everywhere now, with a couple of pearls, ratty flower and cheap ribbon.

So if you want somewhere to go tomorrow, the Dingley Craft Market in Marcus Road will be open for business from 9p.m. I won't be there, I'll be under the doona.
Posted by JahTeh at 4:24 pm

Wow. I admire people who have the patience and imagination to make things... so much is mass produced that when you get something that is for you alone, made by someone's hands in a disgraceful loungeroom or whatever...well you can't beat that.

MC,I tell you I will never put up photos of my house from the craft days. It was such chaos, with dogs, cats and kids.

OoC, it wasn't too shabby for those days but craft work is constantly evolving and improving and that wouldn't sell at all now.

Jt, Everything artistic these days has demised through dim wits getting hold of it and making it a finacial objective!

I can't read a pattern so it's all by eye. When I learn how to knit, I'll knit us a couple of blokes and if they're a mistake we can unravel them.