LOOK AT EARTH NOT FLY TO THE MOON 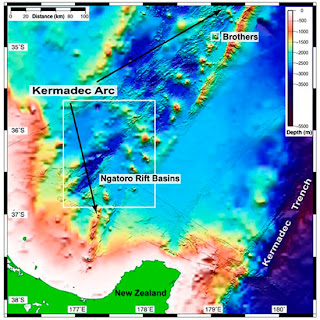 This a bathymetric map of the Brothers Submarine Volcano and the Ngatoro Rift Basins, north of New Zealand. The Brothers volcano is one of a string of 33 volcanoes in the Kermadec arc, part of the Ring of Fire that forms a necklace of volcanoes around the entire Pacific Ocean. It forms where the mammoth Pacific tectonic plate plummets beneath the Australian tectonic plate. 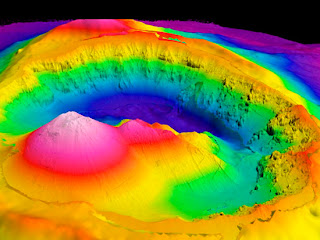 This is the view of the active Brothers Volcano looking from the south into the crater at the summit of the volcano. The site has recently erupted and has ongoing hydrothermal venting. The caldera has two volcanic cones, the smooth one in the left foreground rises about 350 metres above the caldera floor to a depth of about 1,100 metres below sea surface. The smaller cone to the right, which is probably older but still has an intense hydrothermal system at its summit.
The eruption that created Brothers volcano was intense and explosive, creating steep walls whose slopes average 45 degrees. That average doesn't mean straight down, there's a steep drop followed by a modest drop followed by a sheer drop. At the top, the steep walls caved in to form a caldera, or crater, as wide as Mount St. Helens'. The insides of the caldera walls are rugged, with ampitheatre-sized slumps of old rock sliding into the crater.
The images were gathered by the research vessel Sonne during the New Zealand American Submarine Ring of Fire 2007 expedition.

I'll tell you what...they certainly have a colourful landscape those New Zealanders. I take it that volcano spews out spray paint.

Grey? It's all green round here. Especially the big patches of mould.

So Lord Sedgwick was right, you don't wash.

Sedgwick's not been spying on me in the shower again, has he? I thought that was Bobby Bellend's trick.

Wow, thats amazing... My little sister lives in the wilds down the very bottom of NZ and I keep telling her she is living on a sea of mud...maybe that is lava... come home little sister okay