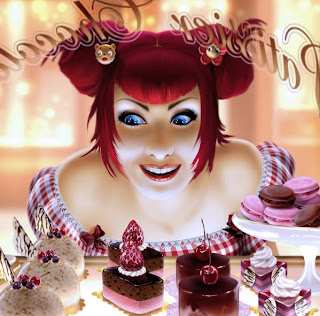 I don't know how Antoine managed to stay hidden at the back of the pastry window but that's the way I look when I see a shop full of goodies. I also get that look when I'm contemplating the fridge door, also covered in goodies. Thanks to Annie O'Dyne for the link.

IF there was a cakeshop in Victoria even vaguely like that one, I would be so there.
David Jones food hall patisserie on Monday was a 10-minute wait for less interesting munchies, proving that people WILL PAY $40 FOR A PASSIONFRUIT SPONGE.

F.G. there is a cake shop in Highett with a window like this.
Fortunately it's hard to get there and I would pay $40 for a passionfruit pavlova, maybe only $20 for a sponge.
Pardon me while I disappear to chew my hand off because I don't have fluffy cakey thingys which I want. I tell you rice cakes aren't going to cut it.

Annie Lennox'll do anything for publicity.

Rice cakes?? Shame on you. Why would you even buy the tasteless things? Go out and get a pavlova immediately. Whipped egg white is full of air and air has no calories, so it's okay to eat. (Just don't put anything on it....)

I have to agree with you about the Rice cakes River--sort of like eating styrofoam. Indeed I've been doing some reading today on molecular physics, and most of the stuff we know of as stuff is actually mostly gaps in between--not unlike meringue. I bought an easter egg yesterday, twas on speciale. Twasn't actually very noice but I ate it anyway.

It's a lovely picture. So, you really look like the girl in the window? Wow! Probably about as much as I look like Brian Jones...

Bryan's on the money with Annie Lennox - she just swept swiftly through Melbourne so we all know what she looks like - maybe the artist was subconsciously influenced; but I thought of Coppy the minute I saw it: red hair and big eyes for cake.

Want a cake, Brian? Or is the diet on again?

River, I'm not that desperate, I eat the 5 grain rice cakes which do have a bit of flavour. Pavlovas are not fattening, it's what I put on them, chocolates flakes, crushed mint bars, coffee cream or bananas, strawberries, passionfruit, fresh cream and I want one now.

Caroline, that is desperate, eating old Easter eggs when the chocolate is blergh even when fresh.
Ordinary rice cakes are like styrofoam but the grain ones aren't too bad.
Molecular Physics?????

Lad Litter, I'm crushed. You really don't look like Brian Jones? Is that when he was alive or now that he's been dead for yonks?

F.G. I felt sorry for Annie being dumped in the middle of our horrible Logie Awards, even my sister gave up half way through watching. I hope Lennox was well paid by the second for the sheer boredom.

Te la ma Maria, I love art like that. There was a very tall blonde model in the 60s called Verushka who was famous for having herself made up like these artworks.
I can't draw a straight line so I admire anyone who can.

This is great ...am sending it to my girls...I can see all our faces behind a window looking at lovelies just like this...especially Melissa...she is the biggest girlie on the planet I know...where she comes from who can tell...a throw back to my mum I think.