RIGHT UNDER OUR NOSES 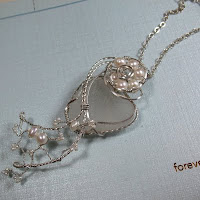 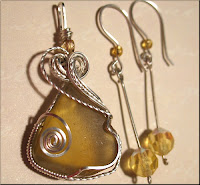 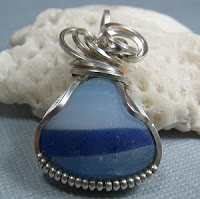 No, it's all glass. Seaglass, fossicked from the shoreline where it's been thrown up by waves after being tossed, weathered, pitted by the leaching of its components by sea water. It comes in all colours with the rarest being red, made even more rare if it can be identified by the trace of a pattern.
Henry David Thoreau said, "The sea, vast and wild as it is, bears thus the waste and wrecks of human art to it's remotest shore....It lets nothing lie, not even the giant clams that cling to its bottom." So it is with seaglass, always flung back to where it came from. 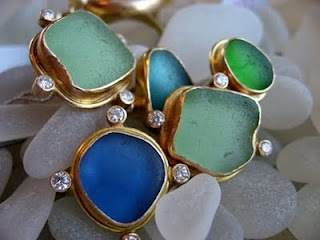 These lovely pieces are by Lisa Hall and gives an idea of the colours to be found and treasured. It's almost like looking at priceless emerald, sapphire or jade. There are distinctions between the various seaglass specimens, antique seaglass develops a distinctive white residue resulting from extensive exposure to elements of the shoreline.
Seaglass comes from coastal regions everywhere especially it seems when strong storms coincide with a full moon.
New finds of old glass are becoming rare since we've taken to plastic bottles which only float and polute the beaches probably burying the seaglass underneath the dross. I hate to think how many times I've walked over a frosted piece thinking it was 'just old glass'.

I forgot to give credit to the silver jewellery.
http://www.artwearbymona.com

Very beautiful, FB and I often collect the seaglass we find but haven't known what to do with it before now.
Very talented artist!

I always meant to collect a jar of seaglass and use it to make a mosaic. Guess I've left it till too late!

Fleetwood, considering the bashing Britain's getting at the moment, you'd be hard put distinguishing between them. I'll give you a tip, dead jellyfish stink.

Helen, it's never too late and everyone should have a project they mean to do even if it means getting to an old age and forgetting what the glass was for. I've got several projects like this.

Jayne, he's in the gem club so get him on to the silversmithing for Christmas.

That stuff is seaglass? It's beautiful. I'm going to watch out for glassy bits now, take any bits I find to a jeweller or some other crafty person.

River, Just a collection in a pretty jar on a windowsill would look nice.

I am amazed at how beautiful it is..thanks for this Jahteh