This photo was taken on Friday 13th November as a giant wave surges towards the 60 foot high sea wall at Porthleven in West Cornwall. 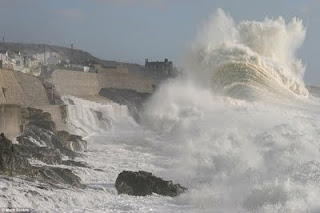 As it hits, it swamps the wall with local people saying it is the largest wave they've ever seen. 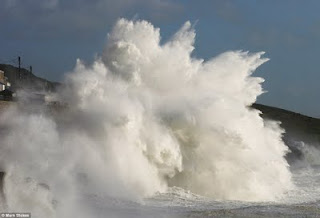 The storms hit coastal regions with a vengeance with the strongest winds of 100 mph recorded at Needles on the Isle of Wight.

Before he gets here with a smart comment, I know the wall didn't get swamped with people. I was tired, shoot me.

Fleetwood is a coastal town ...

Seas are always calm and placid in Fleetwood

If it doesn't work this time, cut and paste http://highriser.blogspot.com/2008/04/just-for-lord-hughes-of-fleetwood-but.html

I agree Stacks, Fleetwood IS a whole coastal town.

No, just struggling to get the link working correctly. Operator error.

It was a great link - fun to re-visit old comments.
Speaking of storms - it's a total duststorm on the roads into today's Ballarat Cup out at Dowling Forest where I have just dropped 2 people who plan to need a taxi home; as will most of the crowd.
One-fifth the size of a Melbourne Cup crowd, but there will be 10 times the arrests. Last year I saw a bunch of police returning at the end of the day and one had bleeding head wounds.
Y'all wish youse was at it I can tell.

Dust? Count me out. I'll stick with invisible exhaust fumes thank you.

Stacks, I hope that wasn't your Papa that started driving in NSW and ended up in Victoria, it just sounded a lot like him.

Andrew, not fond of exhaust fumes either after sitting at the bus stop this afternoon.

oh JahTeh you are not the first to say that to me.
There really are lots of 85-year-old dingbats out on the highways, completely out of control, whose children have given up trying to talk sense into them.
Cashed up toddler-brains. Scary.

I worry for the pets which rely on them.

It's a beautiful wave. I love being on the beach in stormy weather watching the waves crashing on rocks.