MEMOIRS OF A GEISHA 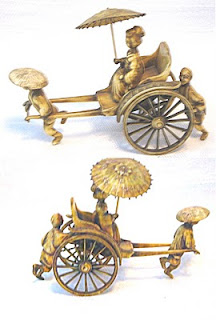 Well, not quite but if you could have seen a little old lady dressed in pink, holding a pink Japanese parasol, waving a white and silver fan being driven down the streets of Mentone today then those images are what she would have looked like. Fortunately for me I can't push the wheelchair because it's too big and heavy but I was the one running in front listening to a string of commands. There were four wheelies heading for the garden cafe, just one of their haunts for cake and coffee. Next week they're off to the Sportsman's Club in Mordialloc. They've given up trying to have fish and chips at the pier and there goes my dream of seeing mother beating off seagulls with her pink parasol.
I did have an absolute brainwave on the way to the cafe as it's halfway between the home and her solicitor, so I rang to see if her will was ready. It was, the secretary came down, she witnessed it, one of the social workers witnessed it and one more thing is off the list.
AGL has given me a 53 cent credit for the gas bill. There's no way I can collect a stupid amount like that but just think of how many households have given up 53 cents and those money grabbers are way out in front.
I've put loads of loot in her home trust account, more credits on her mobile and the only thing that would make her more happy is to take my shiny homyped shoes off my feet. I'll try them on her on Sunday and if they fit, I'll buy her a new pair. After all a geisha has standards.
She has developed an allergy on her face and the nurses can't work out what from but with all the wind we've been having, she only needs a spot of pollen on her skin to start something up. It's why we never take her flowers or give her perfume so the girls are checking the rooms for any pollen type flowers. I'm glad I didn't listen to family and bought her the mobile, just being able to ring me last night made her feel better especially after the third call.
The daughter of the new lady in the room still doesn't get the message about personal space. The nurse I spoke to tonight said that there were far too many visitors in the room last night, not only was my mother ill and tired but new lady was exhausted as well. I really hate to have to put it in writing and make an official complaint as I'm not the one in the room but the directors have noticed and now that I've spoken up, will quietly have a word.
So after all my doing good things all day, I came a cropper. I might have paid off mum's credit card but I forgot to close it down, jeepers charges! If her pension goes into St George tomorrow then I can go and close cheque and credit card down. How stupid to think because it was paid off that it went away. I plead stress and hysteria.
Only two letters to come, Dept. of Ageing and the final water account and I'm finished. What a bloody nightmare.
Posted by JahTeh at 8:28 pm

Congratulations on your time-saving BrainWave In A HeatWave.
DailyMail today has both sides of the parent-care argument expressed.
The case against expresses my situation almost identically.

Watch that geisha - they are all real divas when there are no men around.

Are those ivory figurines? Have they started giving them away with Kinder eggs as well now?

What? Holding her own umbrella? Shocking!
Servants are so hard to get nowadays. The lower orders need a boot in the arse!

Surely you at least peeled the grapes for her as she was being wheeled along?

Seriously though, only a couple more tasks to do and then you can put your feet up and eat all the apple cake you want.

Good to hear action is being taken on daughter of new lady. I've worked at homes where intervention orders were in place to keep rellies at a distance due to interfering with their own and other elderly residents and these were la de dah people who resided in Malvern, Armadale and Toooooorak, dahhhrling.

"What a bloody nightmare." But the light at the end of the tunnel is getting bigger and brighter, right?
So was it a properly conducted outing or did y'all have wheelchair races?
I remember those little rickshaw souvenirs, I had two of them years ago, they were made of plastic and the wheels could be taken off. I don't remember where I got them from and I don't know where they disappeared to. I'd completely forgotten them until I saw your picture today.
I'm glad something will be done about the annoying visitor.

I've started on your Saint Valentine's poem. Here's how far I've got:

Yes well it may take a while.

A poet is never private, he lets it all hang out. He will expose himself in mirrored arcades. And pay the fine.

Annie O, I think your situation is at the stage mine was before we got her into hospital where she was assessed whether she liked it or not.

Damn you Hughes, I love Kinder eggs and haven't had one for ages, will now.

Rh, I was already carrying a bag on my shoulder that would have killed a draught horse let alone hold her brolly.

You're clairvoyant Kath, I just finished the last piece of one I bought yesterday. My diet is really getting disgraceful and I was too tired last night to even have a lean cuisine.

Jayne, you wouldn't believe it but I finally got through to mum on the mobile this afternoon and I could hardly hear her for new lady's big mouth daughter on the other side of the room. If Sunday is another horror day then a written complaint is going in.

River,I just checked the bank account and the pension has been changed over so now I can shut down NAB. Something had to go right sooner or later.

Robbert, a poem for me and so right. I stay away from mirrored arcades, one of me is scary enough.

Damn, J, your mum is entitled to the right to expect quietness and privacy in her own room and home, that woman is invading everyone's space.
We used to call time on some limpets who would hold their rellies hostage within their own rooms until the old dears were battling to stay awake.
One woman had a curfew and we'd count down the minutes before we'd have to almost drag her from her mother's bedside otherwise she'd still be there at midnight.

Jayne, there's a residents and relo's meeting 3rd March but mum doesn't want me to stomp on toes.

Wooh. No one here.

Mendleson this evening, wedding march, and the school teacher next door has gone out. Thank goodness. Well I woudn't play it otherwise, last time she threw a vase onto my roof and it smashed.
She is all culture. Recently she stopped me in Nelson Place, had a few other nitwits with her. "Why do you pound that thing so late at night?" she says.
I just looked at them, each one in turn, then strolled off with stupendous dignity. Lucky I was wearing my boater.

I have a new Follower and went over to be polite and they have an antique photo of a geisha cart you must see.
scroll down to their 5th Feb post.

What a conundrum its all been...almost there legally by the sound of it...