THIS WAS PURE GOLD 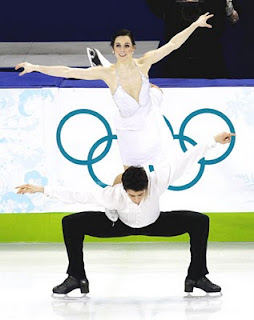 I watched the final of the ice dancing last night and Tessa Virtue and Scott Moir of Canada truly deserved the Gold Medal. It was technically difficult but so elegant to watch as they performed to Mahler's Symphony No. 5. What made it easier to watch were their pared down costumes compared to the Americans and Russians who had too many frou-frou flapping things that took away from their performances. Instead of watching them, I ended up watching the flippy bits of material going every which way and made their performances look messy which they weren't.

I've found it hard going to watch the ice skating no thanks to Channel 9 who slotted the performances in any old spot. The remote got a real work out but I still missed just about everything. I can't stand the ads which go on forever and I can't stand watching the 'hosts' waffle on about nothing. I was actually nostalgic for Bruce McAveny (sp?). But catching this one performance was worth the channel switching.

"I've found it hard going to watch the ice skating..."

Same here, which is why I've never bothered.

We caved in under the onslaught of Eddie Everywhere and got the Foxtel Olympic channels put on, Dad loves it and knows what's on when and where.

THE STATE OF PLAY.

PS: I saw you on Bush Slam, you're sure looking good, curvier than a Queensland Gerrymander.

I haven't seen any of the winter olympics, it's on too late at night for me. I need my sleep if I'm to stay awake at the checkout, can't have customers just waltzing (skating?) out with unpaid for groceries.

Actually things are really quite beautifully remarkable .. (but we keep that sort of crap to ourselves. GOD FORBID!)

Considering the snow you've been having in Pomland, I wouldn't be bothered either. I bet you throw the cat out to watch it slip and slide though.

Jayne, I couldn't stand Roy and HG but they were better than Eddie and whoever the blonde is.

Robbert, be careful what you wish for!

River, at least 7 used to repeat it the next day or highlights of.

Thank you Oz, a fellow dreamer. It makes my knees hurt just to watch.

Davo, with us still. You'll have to change the name of the blog to the Wandering Wombat. Glad to see you're alive.

All women are disciplinarians, some worse than others, Miss Croggon could make big dough in leather.