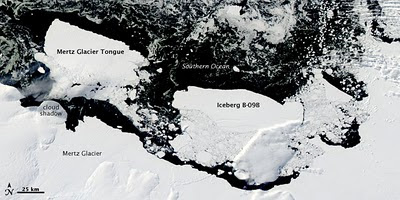 Two massive icebergs drifted along the coast of East Antarctica in early March 2010. In mid-February 2010, the Rhode Island-sized Iceberg B-09B

with the protruding Mertz Glacier Tongue along the George V Coast. The Mertz Glacier was already in the process of calving an iceberg when the arrival of the B-09B accelerated the process, leaving two icebergs the size of small states off this part of Antarctica’s coast.

satellite captured this true-color image of Iceberg B-09B and the newly created iceberg off the Mertz Glacier. Between each iceberg and the coast floats a mélange of smaller pieces of ice. Farther out to sea, delicate white swirls indicate a relatively thin layer of sea ice. Occasional clouds floating overhead cast shadows on the ice surfaces below.

I couldn't have put that better myself so I didn't, just copied and paste.

It's the ice bridge forming, soon the Antarctic animals will be arriving 2 by 2...

Was Leonardo De Caprio on one of them? I hope so. Drowning only once isn't good enough for him.

Ice.
My vast abode.
From wanting everything.

When a poet is on topic it's an accident. A poet is never on topic. Or he's a flea, not a poet.

I'm surprised to be driving a BMW Z3 roadster.
All I did was be polite.

You dirty dogs, you filthy swine, I hate you.

ha ha ha, hello darlings.
Well look here, there are batty women on this internet who've suddenly become 'Great Writers' at age fifty-five. They're driving their husbands nuts. Having a naughty wastes their time and they won't do any housework.

Well listen, give it up, you silly old cows, or get some shock treatment for Christ's sake!

Fleetwood, that was my favourite scene in the movie and he froze to death, he didn't drown.

Hello Hapi, you probably wont be if you visit here too long. We're all Mad Hatter's Tea Party in these parts.

Robbert, Ice is lovely, especially floating around in a sea of Bombay Sapphire.
A BMW roadster? I'd need one for each foot or am I thinking too small.

River, ignore him, he's dangerous to all women.

Robbert, did you get banned from the Cat blog again? I saw your comment and thought 'trouble'. Just for once would you leave one of your feet out of your mouth.

The trouble with cat blog is when I quietly refute something she's just said about me she deletes it. Meanwhile she and her gang are free to say what they like about me. They're a protected species.
I really have got a Z3, 2002 model. I don't know for how long, I'll give it back eventually. It's got a big front end (the reverse of yourself) you'd fit in okay but might have trouble getting out, but that's your charm.