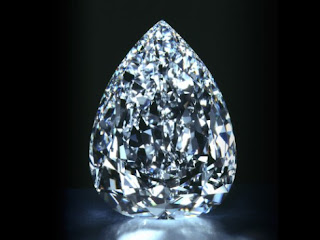 Now this is what I call a decent chunk of diamond. It's the centrepiece of the De Beers Millennium Collection and called appropriately the "Millennium Star", a D colour, flawless pear-shaped 54 facet stone weighing a whopping 203.04 carats. It weighed 777 carats in the rough and it took the Steinmetz Group three years to cut. It was first split in Belgium, polished in South Africa and finished in New York. Harry Oppenheimer remarked that it was the most beautiful diamond he'd ever seen and he's seen a lot of diamonds in his time. 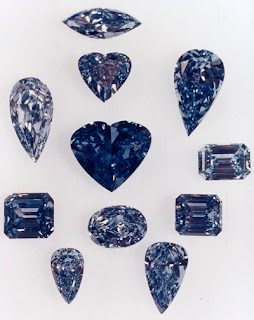 Now we have the rest of the Millennium Collection. Eleven rare blue diamonds with a total weight of 118 carats including the little one (5.16 carats) at the bottom which is being auctioned at Southeby's in April. The lovely Heart of Eternity at 27.64 carats has been classified by the GIA as a Fancy Vivid Blue, a grade higher than Fancy Intense. 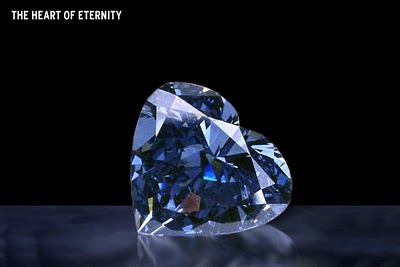 Blue diamonds are rare with red diamonds the rarest of all. The De Beers Premier mine is an important source of blue diamonds but they only make up 0.1 percent of diamonds mined there.
The Heart of Eternity is beautiful, more so than the Hope which is a Fancy Deep Grayish Blue and although larger at 45 carats, I'd prefer this Heart to be mine.

Ooooh! Shiny! I love the square ones.

River, I must admit I like baguette diamonds rather than round but I wouldn't toss the heart back. I think I remember reading that this was the inspiration for the diamond in the film 'Titanic'.