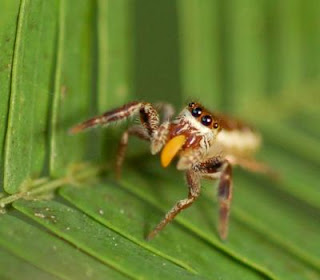 This is Bagheera kiplingi, the first vegetarian spider known to science.

It was discovered in Central America and goes after plants as a primary food source.

Out of 40,000 known spider species, this is the only one who hunts plants. 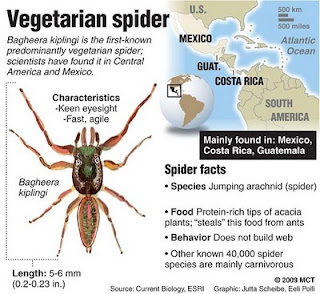 Told it wasn't cute, fast, agile and it jumps.
**********
The human body is estimated to be home to 100 trillion living microbes. We're a buffet of saliva, sweat, dead skin cells, food particles between our teeth and our digestive system.
I vote yes for phone sex.
**********
Now for our lovely Kath, some vital infartmation. There are scientists who specialize in fart research (bet you didn't know that) and the world is divided into smellies and inflammables.
Smellies have sulphate reducing bacteria which produce hydrogen sulphide especially if they're diet is high in sulphurous foods such as eggs, white bread and red wine.
Inflammables have methane-making bacteria. Methane is odourless but this is the one that lights up the world if you put a match to it.
(Kath I'd love to be there when you tell your lovely daughter that you have a new party trick for parent/teacher night)
**********
And now for something completely different. I received my order from the Chocolate Mill this morning, very early, so early I didn't have half my teeth in but remembered not to smile at the delivery man. I had to sign one of those dinky little electronic machines that makes your signature look like ants crawling away from a jumping spider.
It was a big box, goodie says big stomach. So I'm searching through crumpled newspaper like a child through cheval merde looking for the pony and find a minute box in the bottom. I swear it was so small it could have been sent in a CD package but I'd forgotten I'd ordered chocolate covered licorice as well. I did a quick check, yep, 16 truffles but so little. I looked at the hand made chocs at Southland which are selling for 2.95 each and calculated that what I spent was less than buying 16 of these. I haven't touched them, they're for Egg Sunday. Five days, I have five days to go.

I didn't know this about spiders. I thought that a lot of them must eat vegetable type foods as well as bugs etc. I always told my kids they needn't be afraid of huntsman spiders because they don't bite people, they only eat fruit, why else would they live in the apricot and plum trees just outside their bedroom window?
Also, I now know I'm a methane producer, thanks for that.

I love the notion of egg Sunday. Spiders of all varieties except the poisonous one do not bother me, any more than human smells, especially my own.

Love this post, JahTeh, you're a font of the ephemeral, and we all need it from time to time, especially as it applies to our bodies.

River, they only eat vegetables with meat on them. And beware of naked flames.

Elisabeth, bodily smells are the most useful things in diagnosing medical conditions especially in Chinese medicine. My sister has been nursing 30 years and she can smell infection on a patient.
Spiders don't bother me as long as they stay outside but there's nothing worse than waking up in the morning to find a flattened one in the bed or the cat walking in with a huntsman on its head.

Zombie Jebus day sells it for me :P

Jayne, poor bloke, he must be turning over on his cloud at what people have done in his name. I'm surprised at the lack of GodBotherers this Easter, what about your area?

Interesting about your sister, I can often smell infection too. Does she also recognise a "look", in a person who is ill, but still walking around appearing normal? I've seen it a couple of times, only to find out the paerson later is in hospital, usually with some type of cancer. I've been known to "see" a pregnancy in the very early weeks, before the mum-to-be starts telling people.

River, you have the sight, as the gypsies would say. Do you see auras as well?