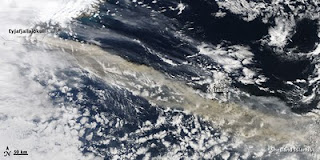 This ash cloud fom Eyjafjallajokull volcano is streaming across the Atlantic towards Britain and Europe and it's the reason why all flights have been cancelled. The ash is not the kind of powdery grey stuff left over after a fire but it full of tiny pulverised particles of rock which can stop jet engines and strip the paint from the fuselage. The tan colour of the cloud indicates a fairly hight ash content.

This eruption started on March 20, and comes from a stratovolcano which means alternating layers of ejected ash, lava and rocks. It is erupting underneath the ice of the glacier, melting the ice which is causing the violent explosions as water hits the molten lava. The original fissure was about 1000 metres long has joined two more fissures and is now a single erupting vent.

I also heard that the melting ice is causing serious flooding downstream.

I wonder how long this volcano will keep on erupting, for selfish reasons, I might add. I'm planning a trip to England mid year.

Will it still be spewing ash in two or three months time?

How will it be if we can't travel for months on end?

I should not be an alarmist but a vulcanologist on the radio yesterday warned it could be some time before our jets are safe to fly again in the affected regions.

Personally I think it's all a conspiracy to keep the electorate confined to Blighty so that the polls look better. The news programmes keep going on about this massive plume, despite the fact that it's a clear blue sky without a cloud in it. The reporters reckon it's too high up to be seen. Yeah right. Surely, if it's bad enough to ground every flight in Britain, the sky'd still be dark, or murky, or something. Not completely clear blue. Next week the Queen's getting a new set of clothes made from invisible thread, I've been told. I'm staying indoors.

Eyjawhatwhatwhat? Who names these things? let's just call it volcano Eddie. So much easier......

Now, about that sapphire.
just kidding, I'll shut up now. But I will print the picture and take it to my local gem shop to see if they have something similar.

Somewhere in the bay a little disturbance, and water sloshes the pylons of Ferguson Pier.

Darlings, there is nothing more to say.

Breeze blows rubbish into doorways along Hall Street. Hallelujah. Louts toss some in, just to make sure.
Darlings there was just one thing I had to do to get myself pensioned for life. And so I did it, unveiled my mother, in a tattered room above bankrupt shops. The govt sure know a bargain.

Ice -and lava. How ridiculous.

Paradox will trick you all.

My broomstick is in permanent parking.

Andrew, not only that but it's depositing great blocks of ice on the banks.

Elisabeth, it's the high level winds that are causing the trouble but once they drop so will the ash.
In the early 17C, an eruption covered so much of the region with ash that 50 percent of the population died of starvation.
You don't want to fly through this, google BA plane and Indonesian ash cloud and you'll see why.

Fleetwood, when you look at NASA's map of the cloud, it's sort of missed your little corner of the world. You must remember that British Airways plane that lost all four engines going through an ash cloud?

River, take a bank loan as well but heat treated quartz comes up with some lovely colours but if one likes to be snobby about these things then Australian sapphires are the only ones to buy.

Robbert, that sounds easy, I had to have my legs chopped in half to be pensioned for life.

Jayne, mine too. I mean we are downunder but that plume is going 7 miles straight up, who knows where it will end. Although if we line up all the blowhards in Canberra, we should be able to send it back.

It was the right place, broken-down furniture, social worker on an old kitchen chair. She looked sad, but laughed.
Or I'd have told her nothing.

Robbert, you mean you found a good social worker?

Social workers (all social no work) are generally useless. Born gossipers, the uni degree falls into their lap.