TOO GOOD TO BE TRUE AND IT WAS 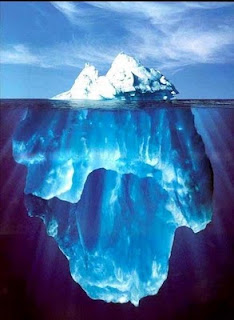 Adrian Round pointed out the sad truth -- this photo is a hoax!Ralph A. Clevenger. It's probably best known from its use on a motivational poster put out by Successories

, a company that produces posters and other materials with inspirational mottoes for use in business settings. Icebergs off Newfoundland may weigh as much as several million tons, but not 300 million tons as stated (though they do occasionally reach that weight in other parts of the world)."

See the original "photo" at

Meh, no one was hurt in the making of it, so let's just bask in the peaceful blue glow and dream of when these behemoths will reform the ice bridge from Antarctica to Williamstown.

Apparently it's been floating around the internet blogs since 2005. I haven't followed up on that berg that was heading for Western Australia, now on my 'to do' list.

I agree with Jayne, let's just enjoy it for it's beautiful blue colour and peaceful look.

River, as you know I am a collector of iceberg photos including this one.