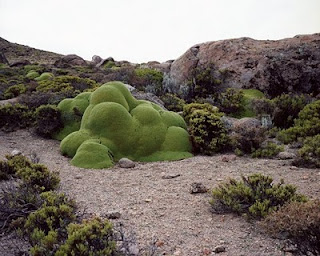 I could really get to like that green blobby thing pictured here. For a start it's growing in the Atacama desert in Chili which is not the most hospitible places for growing. It's called llareta, a relative of parsley, looks like moss but actually consists of thousands of flowering buds on long stems which are so densely packed together they can withstand the weight of a human. Some parts of the above plant (photographed by Rachel Sussman) might be more than 3000 years old but we don't know enough about it to be sure. It has adapted to this extreme environment and is very slow growing. Of course humans can't leave it alone, the locals use it as fuel and make medicine from it which is fine if you're living in the same extreme location but don't tell big Pharma companies or it will be history. 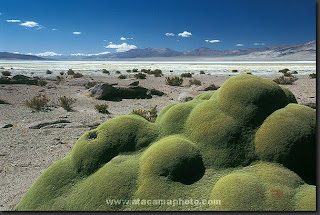 I'd love it in my garden, no weeding and it looks so 'Dr Who'.

This looks very much like the plant I've seen in googled images where they've been cut into shapes such as bench seats and body parts.
I'd love to have a couple of these, being so drought tolerant they'd go really well here in SA. Wonder if my local nursery has any....

I would be scared it would grow quickly and come in my front door.

It is splendid, very much Doctor Who lol.

My son loves this.

River, I just love the blobbyness of this and could see it all around the house.

Andrew, you live in a highrise, the only thing coming in your door is seagull crap.

Jayne, Can you imagine this in moonlight? The thought that I'd never have to worry about the weeding I never do anyway.

Helen, next holidays, a trip to the Atacama desert for him.

I could do with a couple of those in my lounge room!

Kath, only if green goes with LoveChunks but think of the litter we could hide under there.

If social science is my niece: gloomy countenance, entertaining your complaints because it has to, but with its mind made up already, then it's the worthless thing I always thought it was. Social science has its reply for every circumstance. You can look it up in a year nine text book.
My niece is here for a conference, a three day gabfest if you don't mind. I went along for one of her speeches, and it must have been good because I couldn't understand a word of it.
Afterwards they all hurried off to Brunswick Street. Latte, carrot cake, vegetarian foccacia. Speaking of which, that cancerous green mound reminds me of Mark Bahnisch: stupid vacuous man-in-a-skirt from Griffith university.
Golly, if social science ever had a buffoon he's it.

Wow - curiouser and curiouser - it does look alien...

Robbert, what in the hell is social science?

Therese, it's a shame Craggy Island is so wet, these would be great there.

Social science is Mark Bahnisch peeping through the fence at a man having a pee in his backyard.