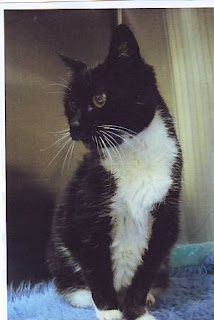 The Vet took this photo this morning before the scan and X-ray revealed the pancreatic cancer which had metastasized into the lungs. She wasn't in pain but would have been in a few days as she struggled to breathe.
We, or should I say I, made the decision and she wasn't brought out of that cosy sleep on the table.
Her "daddy" is a blubbering wreck who's just told me the best part of his day was coming home to play with her.
Last night she sat on my knee until after midnight as we watched another Stargate marathon.
He came home about 1 a.m. but the light was still on when I woke about 3. He was wrapped in his doona, sleeping on the lounge floor, his head on one pillow and the cat on the other with her paw on his face.
I paid the account, collected the carrier and watched the receptionist cry because she was such a sweet cat and went out to the sobbing father in the carpark.
Posted by JahTeh at 2:48 pm

Oh no! so sad that she couldn't be saved. But at least she wasn't in pain and now she never will be.
Do you think BOH will have another kitty?

Oh fuck. Why does the right decision (the only possible decision) hurt the decision maker so much. Hugs to you both. Lovely that the receptionist wept too.

The hardest and saddest decision we ever have to make. Knowing that you've done the kindest thing doesn't make it any easier. She was a lovely little cat and she had a good home. She asked for nothing and gave everything. Dotson

what a lovely vet to do the photo.
One time when a darling pet of mine (with cancer) was released from suffering, the vet wept too.
Huge massive sympathy and empathy from me. X X X

I just shed a little tear, RIP beautiful one. I'm glad you got to enjoy her life.

It's a lovely photo. I've had to put three dogs down in my time, it's the loneliest thing ever when you love them so much. All my best to B.

Oh Jahteh, I'm so sorry. Black and white cats are so special. Like the receptionist I'm crying too. And it is good.

Oh no, so sorry about her. That last photo is so sweet.

from the photograph she was too strong for it

The life of a human should see out many pets. We are all the better for it. Of course it is sad, but we remember them well. Our vet sent us flowers and that was in the nineties. Not surprising, given what he charged. Just recalling though, it was a horrible experience, in spite of the kindness of the vet staff.

I am sorry for your loss. I know how hard it is to lose one that has been a part of your life for so long. I wish you and your nephew the best during this time. Hope you don't mind an anonymous comment but it is as sincere as if I signed it with my own name.

Thanks everyone. I keep showing the photo to the BOH to get it through to him that she wasn't scared or in pain and I see it's propped up against the computer this morning.
She was such a tiny cat with a kink in the tail where some mongrel broke it and mum had to sign 4 adoption papers before the shelter would let her go but 18 years is a good age.
When the ex left me he also left the four cats so four times I had to make the last journey with them alone and I'm sorry I couldn't be with her.
The last cat I had to take in a taxi and I asked for an animal friendly driver. I got one, he was in tears the whole way and even carried the cage into the surgery.

The surgery had a livewire ginger kitten in a huge cage including a hammock hanging from the top and he was wanting me to play with him. I had to be so hard hearted but yesterday there was a family there adopting him. He was all over the little girl and the happy purring was so loud, it was a rumble. That nearly did me in.

She was a very lucky cat to be surrounded by such loving people who did the right thing for her in the end. I hope you and BOH are okay. Maybe, after a little while, you might make another little cat one of the luckiest in the world?

Jay at The Depp Effect said...

You know you made the right decision for her, and so will 'daddy' once he gets his head around the loss. You simply can't justify keeping an animal in pain and discomfort simply because you can't bear to lose them (at least, I can't) and to let her go before she had to suffer too much is the kindest thing to have done.

I did the same thing for a dog I had who had kidney cancer. When we discovered it was in her lungs, I let her go that same day. She was already breathing faster than normal and as an asthma sufferer, I can tell you that not being able to breathe is no picnic. Still hurts though, huh?

So sorry JT. What everyone else said about how lucky she was to have you and BOT to love her. THose black cats with white waistcoats are my favourite.

Been there done that (near identical disease) with our cat, except I bit the bullet and did the 'putting down'.

Goldfish are easier, albeit less personal and long living. :0)

Making the decision is harder than actually doing it.
I've got a heap of cat food but I dare not ask him to take it to the animal shelter so I'll parcel it all up into small lots and put them in the food bins at Safeway. At least it will go to people who are finding it hard to feed their pets.

And no more animals, not even a goldfish. I have a concrete budgie and that will do.

Am so much feeling for you - I have seen too many of my cats be killed, die or have to be put to sleep then a couple of dogies i loved - it is so sad and final - but they know we are helping them because mine have all made such eye contact with me and I stroked them till the end - they know we loved them, fed them all of that and in the law of order - the universe has an order - of that i am sure - all we love , loved will know and one day will be known to us when we are no longer alive - this I don't believe - I know!