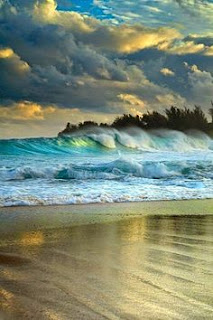 Apparently this will be us this afternnoon to late evening but not as bad as it will be in Adelaide all day. It was sunny this morning so I dragged both bins out knowing what happened yesterday.  Rain would be okay but not wind, I have the small bin filled with those rotten packing peanuts (biodegradable) but hideous to get rid of and so light if the bin does go over then it'll look like large floating hailstones.
But back to yesterday, off to the podiatrist in glorious sun at 11.30 but by 12.30 it dropped to freezing wind and rain and not a lick of sun anywhere. At 2.00 the sun re-appeared but the wind didn't warm up and I was lucky to get home before more rain.  Forecast is rain tomorrow, maybe on Friday but probably sunny on Saturday because it's the Football finals.

Our 'hard rubbish' collection is over for another year and I was restrained and dragged nothing home but I did covet some nice kitchen chairs up the street but too far for me to get them to my front yard.
This year I have noticed something different, big 4x4 cars with large caged trailers full to the brim with anything and everything and COLLECTION AGENCY written on the doors.  I counted 6 of those in one day.  I've never seen so many 4x4s crawling up and down the street.
The Council made it illegal a few years ago to go through and take whatever took one's fancy and we all ignored that.  It's the highlight of the year, watching garbage start at one end of the street and work its way up and down and considering that the Council doesn't bother to recycle, just throw in the back of the chomper and off to landfill, then dragging home a kitchen chair or two was in order.  But this year was bedlam. One of the neighbours told me that the kerb crawlers were putting a really good pile into their GPS to sneak back at night.  Even the walkers came back at night by torchlight, like I haven't done that myself, but to go through my pathetic little pile was a bit much.
The Collection Agency trucks  were scooping up everything. It wouldn't surprise me if next year there aren't drones flying the skies and reporting back to even bigger trucks.  Well, they missed mine last year with a sofa bed and huge lounge chair which was a shame since that went into the chomper truck when I really wanted a good home for them.
I did like the chairs, I always look for the chairs or a bookcase. It's a good thing that I don't drive, someone would have to remove the car keys from my clutched hand for the whole of collection week.

We don't have hard rubbish collections here anymore :(
if we want to get rid of piles of stuff we need to apply to the council and pay the pick up fee, I think it's about $, then we get a green sticker saying the dump is legal and paid for which must be put on some prominent piece to be easily seen by the truck driver. Every one watches out for these and if they can, they add their own bits to the pile.
Within the grounds if you just want good stuff to get a new home, people put things on their footpath section or lawn and hope it disappears. About two weeks ago someone put a nice sofa and non-matching large armchair on their lawn and they are still there, no one wants them because they've been rained on now several times, so the cushions are probably soggy and will soon be growing mould.

We don't have a hard rubbish collection either. Instead we are expected to pay through the nose to either get it to the tip ourselves, or pay someone else to do it.
We are expecting rain tomorrow. With possible storms.

This year for the first time I saw the collection truck munching up what was left out and I was surprised. I assumed it was all sorted and then recycled in some way. Mattresses are collected separately for specific recycling.

River, there'd be an uprising around here if we had to pay for collection. We pay enough on the rates as it is and usually this is a good time because there's not a lot of rain except for this year. I love the idea of everyone sneaking out to add to the paid for pile.

EC, you have enough hard rubbish dumped in Parliament. I'm waiting for a notice because my nature strip hasn't been mowed and I haven't been able to get in touch with my emergency mower. Poor Eric the mower has cancer everywhere and won't ever be mowing again. It's raining here now and I can't get out to bring in the bins. That's a new Council lurk, leave the bins out for over 24 hours after collection and I get fined, stuff them.

Andrew, it's only been the last 2 or 3 years and a disgrace in my book. Tv's are collected separately as are mattresses. I don't mind broken bits and bobs going into the chomper but good chairs break my heart.
Knowing our Council they wouldn't pay casuals to sort it all out and give some body a job. It's Council election time again and after all these years I don't believe a word of any of them.

During my years on the fire department, I loved hauling home furniture, dis-assembling it and making it into something else. I once turned a baby crib into the cutest chair. But when we moved from Indiana (homey type of place) to Florida, there's nothing to pick up since we're all too old to carry things to the curb. LOL

Mattresses get collected separately and taken to be burned, it's a health and safety thing, you never know what is/has been in/on them.

lotta joy, I keep seeing this brilliant idea on Pinterest. Take two identical chairs, join in the middle with backs as side pieces,remove the seats and replace with one long piece of wood and you have a garden bench. Yes, the oldness catches up as I found out when, in the pitch dark, I dragged home a 6 chair patio table with the chairs. Idiot neighbour told me later if he'd known he would have given them to me and carried the whole lot in.

River, we have a special mattress recycle factory that removes the fabric waste and re-uses the springs, also any wood is sold off. Andrew would probably remember the huge fire when some idiot set it alight a few years back but it's back in business and doing a job not letting them go to landfill.