Keep reminding me it's a new year while I shake off the old one. 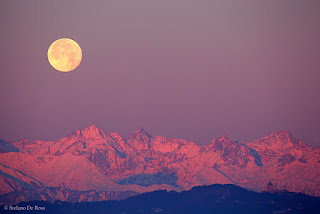 This was one of 2017's super moon but we have 3 in this new year.  Nature saved the best til last and that will be a blood moon at the end of January.  Apparently it's best seen from Adelaide so hang on River, there could be a mob at your door from moon rise to moon set.

2017 was not a good year, hardly a month when I was not ill.  Mother is still with us although she did not look good on Christmas Day.  If there is one Royal Commission we should have, it's a thorough going over the Aged Care Homes, not for just the care but for the pittance they pay the staff, the inadequate training they receive and the sneaky methods these so called 'not for profit' organizations manage to stay a mm within the law.  So few staff were on for Christmas Day, it was disgraceful, the girls were exhausted and the 'not for profit' refuses to pay for extra Agency Staff when needed.  Mother wasn't settled down for night until 11 p.m. and she'd been up at 7.30 a.m., put to bed at 4.30 and I didn't leave until she'd eaten some food,  didn't fancy her usual egg sandwiches but the chef made mince pie with custard disappeared in a flash.

In an interesting co-incidence I had ordered beautiful silk and silk paper peony roses to renew the rather tatty flowers at the family grave in the Pioneer Cemetary in Cheltenham.  The next day a fire started in the Park, skirted the golf course and hit two spots at the cemetary.  The grave wasn't damaged but the flowers were nicely singed.
If you're cemetary loving type then take a tour here .

New Year's Eve was so quiet around here, it was almost spooky.  I believe the fireworks in Sydney and Melbourne were spectacular but call me Grinch when I think of them as an appalling waste of money.  The Bear has been through so many thunderstorms  lately that he's lost his fear of loud bangs, he just curled up a little tighter in my NEW second hand Laura Ashley arm chair.  It is so comfortable to relax in so naturally Mr Luxury has taken it over.

I have a plumber coming tomorrow to give me bad or good news.  I could hear running water in the kitchen but everything was dry so I tried outside and the hose was gushing brown water, that's rusty water.  The tap was turned off tight so it's either a washer (hope) or a pipe has gone behind the brick wall and the plaster (please no).  But forty year old  copper pipes are not destined to last forever.  I keep moving the hose to the citrus trees and they are loving it.  I've had a bumper crop of Mandarins this years and the possums have been in Heaven but have no manners at all and leave the peel all over the front yard and the footpath and the nature strip. I have visions of several sitting in the paperbark tree and catching the fruit thrown over my 6 foot high brick fence.  The little green parrots are back in the apple tree and I'm not sure which bird has been enjoying the oranges.  It must have a long delicate beak since the round skins sit in the yard completely empty of pulp, just a small hole in the top.  Lovely though to walk out and get a fresh orange for the vodka and the limes will be ready for the Gin in about 2 weeks.

I had a slight problem with the Christmas cards this year, I'd like to say the dog ate them but it was my mother.  She can barely use her hands to cut out for her cards so she just took mine.
She needs to have something to do even if it takes her a week so the brain thought and when a wedding invitation caught my eye, I tracked down invites on ebay.  Some will let you buy a sample so that's what I did, trawled through and found some beautiful laser cut cards.  All she has to do is stick jewells and pearls on the front and post.  Fixed the problem of jewells and pearls being too big, she took my small ones I'd bought for my Christmas cards so that's why you lot aren't getting any this year.  There are presents, everywhere and Annie O'Dyne is getting
a 5 year old one.  How I could have kicked it under the bed and forgotten where it landed is beyond me, I mean 5 years ago my brain was still working.  Dear Annie I will brush 5 years of dust off before I send it.

Now if you don't get another post for a week, it only means that an entire bookcase of videos has fallen on me and I am being used as food by the Bear.  Wish me luck.
Posted by JahTeh at 1:53 pm

You really did have a cow of a year.
I am hoping that this one (starting with the plumber) is kinder, gentler and altogether better. Much, much better.

Lovely to hear from you. I keep meaning to email, but a lot of the time I'm either sunk in a pit of depression, or frantically running all over town collecting documents that I must have for several reasons. One is for the transfer to the age pension and the lovely young man I spoke to on the phone offered to email the necessary document to save me the trouble. If only they were all that easy. Loony Louie is still upstairs despite the housing officer assuring me several times that he would definitely be moved out by Christmas or before.
I think your mum is a bit of a schemer, stealing away all your tiny jewels and pearls for herself like that.
I sincerely hope all those videos haven't fallen on you, there's nothing worse than having to re-alphabetise a heap of stuff.
I also hope the plumbing is a simple fix, not a disaster.
Try to take 2018 in small doses to begin with. A day at a time.

EC, a good year started with a delicious looking plumber, if only I was 30 years younger and make that 60kgs lighter. He'd never have made it out alive.

River, It doesn't matter what mum gets, I will eventually get it all back. I really hate the thought of her lying there with nothing to do even if it's just one card a week. As for the videos, I'm throwing all of them out as the op shop won't take them but it kills remembering the money we spent on them.

For both of you, presents will arrive as soon as I find them. I know they're in boxes somewhere safe. Just think they haven't disappeared until the bed for the next five years.

January 31st ... one hopes that the fog, and smog; of 'Citification' will not obscure the view of a celestial event.

River ??? if you are anywhere near Adelaide - call me ..
Long story - but depression is not a option .. yer i know; been there ; done that ...
sort of understand.

River; also have spare room; no cost - but while only 70klm from Adelaide as the crow flies ... more likely a 300klm or more round trip.
Peaceful (but personally boring) seaside village ...

I hope the bloke fixes your plumbing ok. Nothing worse than someone of your vintage having to put up with poor plumbing. My instinct tells me galvanised pipes will fail in that period, but not copper pipes. Mother's gal pipes have failed under her house and they just get patched up. Without any explaining, read between the lines, it has been a difficult year with plumbing at The Highrise for someone.

Andrew, the plumber's name was Callum, more delicious than a french pastry shop. Nicely styled hair, trimmed beard and moustache and I had to keep reminding myself I was old enough to be his grandmother.

Davoh, stop trying to entice River to your lair, she's already made two mistakes and a third is not allowed. Being a Shearer's cook once, she could probably feed you up nicely.

Davo, filthy beast. What do you think this is, a pick up joint?

Davoh, I've lived in Adelaide for 32 years this month. While a small seaside town does sound tempting, (I love the ocean), I'm sticking close to home and family. I know the causes of my depression and not every day is as black as it could be if I let it. I'm already feeling more peaceful, having reclaimed some routine and spending more time away from the computer.

Happy New Year dear Coppy, so glad you made a post. Don't give xmas another thought. I sent nothing out although I did lunch with neighbours, the total extent of chrismassyness.
I am so sorry you had the pipes thing. Onward and Upward though. x x

Annie O, after 5 years you'll get this present if it kills me. I have found River's and EL Chi's, stupid me put them in Christmas boxes.
Jayne, I found your blog the other day and IE and Firefox managed to lose it.
Robbert, dear thing, back and fighting with Davo, I love nostalgia.

Andrew, he was divine, fairish brown hair, not hairy, so smooth I could have slid up and down him, Public school boy tradie, feet, you're still not believing in those fairy stories. I know you've always wanted to be a 'Daddy' but if I had to restrain myself so can you. If I had to describe him cake wise, meringue too soft but a macaron would be just right.