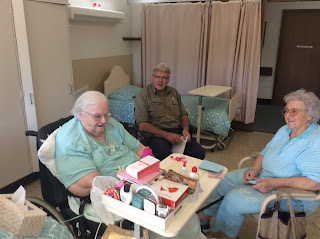 Mother on the  (my) left and twin sister on the right.  If I never have to speak to her again I'll be happy after her ringing me on Christmas morning to demand that her eulogy be read out since she couldn't come because of illness. I gathered from that comment that she intended to stand up and blither on with her usual load of BS.  Sister and I had fights about allowing people to speak but I don't agree with letting people who aren't used to speaking to a crowd get up and waffle on.  I wanted what mum asked me for and she got it.

It goes on and on.  I have been on the phone for nearly 3 hours with bank, Home and Pharmacy and in the finish I had the choice of paying the Pharmacy or going through ebanking looking for a payment I'm sure I paid and he has just charged me again.  I'm too brain dead after wanting to strangle the pious little creep from Mercy Health who said naturally the direct debits stopped as soon as they were notified of death.  Well it would have been nice had they sent me a letter and set it all out.  I think I have paid for everything now but I should have put what I paid into my bank account and then put that into Visa because if can't take that out, see brain dead.  Pension this week and I will put that where the visa money should be.  Can't use anything yet until I get death certificate and will which I think I have and I suppose I have to pay for that and I forgot the Cemetary stuff.  They charge to dig a hole.  I'm going to bed to sleep.

Dearest Copperwitch, I remember that only too well. And arguing with people about whether my deceased mother could write to them allowing me access to the information I needed.
I am so glad you were able to give your mother the funeral she wanted.
Huge hugs.
Sleep well.

I can't relate to much of that but I understand all the hoo-ha of phoning and explaining that someone is now dead and the having to pay for things. My parents weren't in nursing homes, they were at home until they took themselves to hospital where they died. Both requested cremation so there was no cemetery stuff for me to deal with and no funeral either. All I had to do was identify the body at the funeral home, in case the wrong one got sent down from Port Augusta and Port Pirie, then collect the ashes once they were cooked.
I'm glad you gave your mother the funeral she wanted and I agree also with not allowing people to stand and speak who haven't a clue what they want to say.
I hope things are a little calmer now you've had a sleep. If not, go back to bed and sleep some more.

I could have killed the Mercy Health moron who said he was sorry but with Christmas and all, it was hard to get all the bereavement letters out. HOW MANY PEOPLE DIED IN MERCY HEALTH HOMES? It was ten days before Christmas and I only had a letter today in 2019 because I rang. Rotten evil bastards.
My sister had a lovely holiday, went away straight after she got a funeral report from her son, you know the funeral she didn't come to, expensive but the holiday wasn't too expensive.

You have done everything so well for your Mum. Dealing with all the relos, finances, officious people etc can be stressful as we found out when my mother in law died. Please look after yourself and I hope 2019 is a much better one for you.

I'm so sorry for your loss. One of my brother's died in May, one of my sister's died in Oct. Both of stomach cancer. I was with my sister to the very end and made sure as best as I could that her death was handled as she wished. However, she had a husband and even tho he didn't follow her wishes to the T he did enough. Our other siblings and extended family just blew up. Lots of cut ties and harsh words to the point that I don't even care anymore. I'm so done with the people who didn't have a thing to do with the caregiving and handling of things complaining about how they should've been done. - Here's to 2019 and health!

CG, it still isn't finished, can't close the bank accounts without the Death Cerficate, haven't picked up the ashes, haven't called the cemetary because I haven't any proof of death. I wanted to take the roses to the family grave but not in that heat yesterday. Now I have fallen in a giant hole which I promised myself I wouldn't.

Mimi, welcome, I love that name. Weddings and funerals bring out the worst in families, crawl out of the woodwork most of them. I was lucky, there were 3 people I had to tell and didn't want to see them, mysteriously they all became ill on that day.
Good on Mother, she didn't want them either.

Sleep is the great healer, JahTeh: indulge yourself.

We (my brother and I) were blessed in that our parents were the babies of their families and when they died in their late 80s, there were few relatives left to mourn (or meddle). We did exactly as they asked, direct cremation followed by private family services at the columbaria. The only complication was the delay between those events, which occurred while the "kids" were gathered from jobs and homes all over the planet. We dealt with that by putting the ashes in the care of the mortuary chapel, the urn covered by a scarf (meaning the site is temporary). My brother organized fresh flowers and so they "rested" for a few weeks before arriving at their final destination.

I'm so sorry that you're in a position of having to physically cope with moving your mum's cremains, JahTeh. It's beyond awkward and I hope the mortuary can furnish some assistance and guidance to assist you. Would your good doctor refer a "bereavement counselor"?

Beth, the wonderful Doc Marvin has been on leave and well deserved it was. Fortunately the holiday season is over and things will start moving again and it will all be done and dusted. At the moment walking through the house can only be done safely by keeping to the game trails as in a jungle. The bags from the Home are still where they were dropped, Christmas presents are unwrapped, laundry is threatening to take over if I don't wash soon but a good talking to myself about time out had me sitting down with a book and a lemonade icy pole. Cat fur is everywhere but the poor Bear is recovering from the heat last week and bloody fireworks on NYE.

oh Copperwitch I feel your exhaustion, please do make a list of those who could afford holidays but not a trip to a funeral to help you. If they phone, hang up You'll feel good. I am sorry Doc Marvin was restoring himself when he was needed. Hopefully when he returns refreshed he can restore you. A shot of B12 is the thing to perk you up. 2019 is going to be Copperwitch reborn.

Annie O, only you would think a sharp needle would pick me up. I'm just worried about the leaking blister, currently 4cm across, and wish it would dry up. I'm supposed to keep the foot up and the minute I hit the bed, the Bear is not far behind me. Poor darling has had to deal with thunderstorms, NYE, possums and got beaten up by a magpie, I worry more about him. I hope you are being careful with snakes and fires and horrible heat. My stars for 2019 aren't great but make the most of it because 2020 could be much worse. Astrology stinks.