Centrelink exists so people have something to hate more than Politicians! 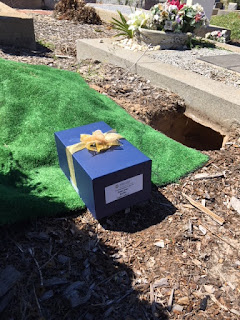 This day cost me $1000, $280 for me to stand there holding the box until everything was ready except I ended up to ill to leave the house.  The girls from the Pioneer Cemetary came to the house and collected mother and sent photos of the work but I didn't get the money back. 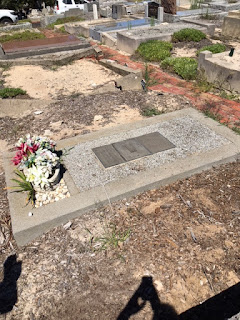 It looks very grubby but then I hadn't been there since the bushfire came through and it needs a good polish. I have silk roses for the new flowers but I need a bag of cement. I put the roses and cement in cut down lemonade bottles and they stay in place.  The raggy ones there were some my sister put in after the fire.  Only two rows were hit by the branches from the enormous pine tree that went up in flames and ours was one. The trouble is now that I need the walker, you can see the red brick path isn't walker friendly.
My grandmother was buried here in 1928 and that big sand patch has been there that long, a 6 coffin plot I believe. My father went there in 1994 and they'd just put another filling of sand over the cracked plot, 2019 and another fresh load has just gone in.  Twenty-five years of filling that ground and it's still disappearing. It's a worry and I walk well away from it.
Anyway the sun was shining and my parents were together on St. Valentine's Day.

Now my mother died on the 17th December, 2018 and the internment was January 14, 2019.  On March 4th, I received a letter from Centrelink to tell me that I had taken money that was not mine. This after all the trouble I had to close the estate, including going to Centrelink to fill in forms and show cards and certificates and asking about the pension payment which was still in the bank. Now a single pensioner is entitled to one extra payment to help with funeral expenses and this is what I thought had been put into her bank account but to make sure I left it alone for two more payment dates, it wasn't taken out and nothing put in.  The girl at Centrelink said it probably was the bereavement payment and if it wasn't taken out at the next due date then close the account and the estate.  The official at the bank agreed so everything was split 3 ways and my sister drove me crazy wanting to know how long before she had the money.
Then comes this letter, the department is going through everything to make sure if I was entitled to this $916 or not. Doc Marvin said to write down every date I could remember dealing with Centrelink and remember what they'd told me about keeping that money.  Fine, except this was when I really went from huffing and puffing thinking it was something I was allergic to but actually really coughing and hacking sick.  The letter also told me to do nothing and another letter would arrive after investigation, the date is now April 4th and I have to keep $1000 in my bank just in case.  I've missed the sales and the chance to get rid of my old oven with mouse, another letter to remind me to have the gas heater checked, $200, ignore and my walker is starting to fall apart.
I only mention this after reading an article in the paper this morning after a mother was sent a letter saying she owed money for a child she didn't have, a child was sitting with her ready to go to school. Apparently someone hadn't ticked a box on a form, the debt collectors were set on her and she got nowhere until a letter to her local member fixed it. I've taken that on board but no doubt I'll get a letter right in the middle of the election fight.

Is it possible they handpick Centrelink staff from the hundreds of school dropouts? How can things go so wrong when you go in there and gives forms and dates etc which get entered in your file so there they are for all workers to see.

In a previous incarnation I worked for Centrelink (before it was called that). As successive guvermints cut the staff and insist that more work is done by less people things like this and the obscenity that is Robodebt will continue to happen. Hiss and spit. Appeal all the way. Outsourcing call centres is another source of error. Back in the day the person who did the work took the call. And was required to write it up.

Government cutbacks in funding Centrelink, as well as the incompetence of its management are to blame for making your stressful situation worse. I think I would follow Elephant Child's wise advice.

Oh my goodness if it's not one thing it's another - enough to drive you to drink eh?
Seriously I really hope this palaver you are having with Centrelink is over soon. It sounds as if it will take a lot of effort on your part to get it sorted. Maybe if they continue to give you the run around a trip to your local member might hurry things along
Take care
Cathy

I don't know why Centrelink is so hopeless. It is a broken system that can't even deal with one person's death, never mind how many on its books die each day. It is no wonder people are now employing expert third parties to deal with them.

Dear JahTeh, please seek assistance from the good doctor and anyone else with alphabets attached to their names. My niece-the-attorney does pro-bono work involving mortal nobodies vs. immortal entities (such as hospitals). Apparently an "inquiry" made on legal letterhead achieves quicker results than complaints delivered neatly typed on plain stationery...

Pity one can't divvy up this mess so that your sibling receives her fair portion.

Before you drag a bag of cement home, try my trick of tying the flowers to a brick

I concur with Andrew & with Beth above. Love from the bush

River, love it that when you do get to Centrelink and they say use our computer just because the letter or document says use computer. I want to talk to a person.


El Chi, everyone says to me, get the name or number of the person behind the counter but that's fine when the memory remembers after remembering the problem you were there for. I usually go blank when I'm miles away and having a coffee.


Cheryl, turn over staff happens in a nano second and it doesn't matter what number or name you were given. Computers should not be used for people's problems, we need a person who's been there.


Cathy, I'm a bit late answering comments but nothing gets done now with an election on the way. They're all too busy thinking up lies about each other. A gold medal goes to the panel show that puts Pauline Hanson, Bob Katter and Clive Palmer in the same room. I would really love that.


Andrew, it's the rules, they keep changing the rules. If greedy Mercy Health had done the right thing and informed them of mother's death, the extra pension would not have gone into the bank and I'd have had no trouble.


Beth, all finished now and I'd kept that payment because I knew this would happen so it's back to them. I am now working on my will so they won't get anything.


Annie O, great idea but concrete can't be stolen like a brick. I have a Bunnings list but I have to book the ute driver and the two never seem to go together.
Besides I'm too busy looking for Christmas presents, that's important for dear friends.