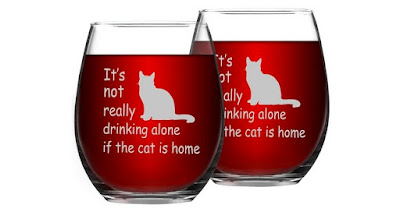 I am so sorry you fell again, the ambos have a good point about the food dishes. It might be hard at first, for the cat, but if he gets hungry enough he will get to the food somehow.
I'm sure you will work something out. I've lost your email address somehow...

El Chi, hugs to you and I hope the other half is coping with not being able to travel.

River, I've been getting spam emails from your account again but they are automatically dumped in the bin. Sometimes I have no trouble with your blog then it won't load again. I end up reading Andrew to get the news.

It was nice to see this post pop up. I hope before you fall you have your hair and make up done.
Can you email if you are doubtful about my name for your new will please?
That must be so disappointing to learn of your granddaughters scepticism. I guess you know where it came from.
Sorry to hear about your sister. From what I know of that cancer, her choice is wise. Lol at smoking and drinking. Why not with such a diagnosis. Nothing to lose.
Have you thought about an emergency alarm to hang around your neck?

Andrew,believe me they have been totally brainwashed. Everything that comes out of their mouths I've already heard or read from America.
It's a vicious cancer and her doctor was surprised that she had never felt any pain, no other symptoms. She just woke up one morning and her face was yellow but that's gone now. It was quite a shock.
I have not been able to get out of the house but now with a care package, I have rails everywhere and the best was having a magnet put on the front of the house so instead of holding screen door and dragging everything in, I just throw it open and it stays. A small thing but such a difference.

Sorry about the spam emails, EC has been getting them too and I suspect others have also. Just dump them as you've been doing. They'll give up eventually.

"This is a cat that eats all his food from one side of the bowl and sits and waits for me to turn it round so he can eat the rest."
Round bowl, if he leans over it for the stuff at the back he knows he'll get food mess on his snowy white dicky-frot, silly.
love from the bush

Again, I'm late to the discussion but I can provide notes from many medical people who will attest I had good cause. Suffice it to say my outcome has been as fortunate as your sister's has not. I'm sorry for the pain this situation is causing you, dear JahTeh, and for the frustration caused by your granddaughters' covidiocy.

I second Andrew's suggestion about acquiring an alarm gizmo. There's also a super duper watch that summons assistance if you fall, also alerting 2 other numbers.

The raising of the cats' bowls worked for me, so did using a smaller bowl for their water.
(My back no longer permitted using me mum's crystal punch bowl.) The solution to changing the litter boxes and my bed linen was hiring a house-helper for a few hours each week. Please consider spending some of your estate stash on self-care NOW: sounds like the younger generation might waste it on statement tee shirts you wouldn't wear...

Hello my little treasures. Rain all day; a crying shame. This is the end of our species. I am smug.

Big woman sews a pirate flag
Wears a gold tiara
Says one day we'll sail the Yarra
With cannon to flatten everything.

A poet salvages what's thrown away. That's what poetry is; other people's offcuts.

Now that might seem like nonsense, and it is, but a poet, having seven billion prospects, many of them nutty, is sure to ring a bell.

A two room shack, dirt road; early morning and I'm four years old, parents in bed in the next room. My toddling brother and sister, hope on their faces, hold the chair steady as I stand on it to reach biscuits in a top cupboard. 'They must be up to something,' says my mother, 'they're very quiet.' I don't falter, press ahead, get the biscuits.

I can only laugh, there's nothing left, clips of memory. My father and me, standing on the dirt road, looking at a burnt out shack above a low embankment. "He died in it," says my father, "in the fire, poor old fella. The cocky died too." There’s a long silence, his wonderment is on the cocky... A few steps have been dug into the embankment, straight up to the shack. My father made the steps, one of his many good deeds: the first he’ll ever tell me about. There'll be lots more.

A school boy in a nice uniform passes our place. Most of all, his cap with crossed beading on top looks ridiculous. I dance along behind him, giving him cheek. He just keeps going, looking straight ahead; a good kid.

Somewhere in the week a sales van arrives. Rear doors are opened and it’s full of groceries. My mother overspends, has to put food back. My mother, poor thing: a child.

She stands at the table, kerosene lamp in the middle. We stand there too, pitch black outside. Father is late, staggering home. "It’s dangerous,” says mother, “there's holes in the road.”

She probably means ditches, either side. Pisspot father might fall, break his neck. But he never did. We weren’t that fortunate.

This is, in my opinion, one of the most important pieces of information for me.
And it's a pleasure to read your content. But I'd like to make a few general remarks.
The website design is fantastic, and the content is superb.
Bellen Amazon