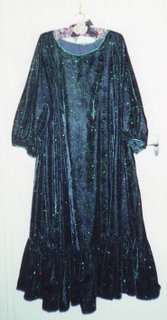 I have such an exciting life that it's taken me nearly five months to fill a 24 exposure film in my camera. This is my September party dress which doesn't show up as it should because I'm a lousy photographer which you all know by now. The dress is a dark, almost black, green velvet with a emerald sparkle paisley pattern. Princess Diana had a dark blue velvet with a star sparkle effect and she and I had the same problem. The little sparkles are sharp and rip the shreds off any exposed skin and in her dress she had a lot more exposure than I did. It took about a week to clear up both forearms so now I remember why it stays in the dress bag. It also sheds little green sparkles over anyone who ventures too near. 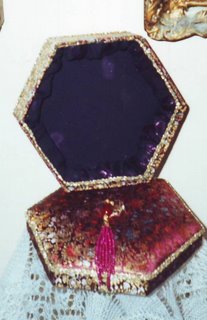 This is the box I covered for the birthday boy. It's six sided which is the Chinese Feng Shui shape for good luck. Yes, once again WWP (I'm going to trademark that) hasn't done it justice.

The brocade was burgundy with a gold thread pattern and to keep the Chinese theme I dangled a bead tassell from a button a la mandarin's hat. I used metallic electric pink beads to pick up the subtle colour underneath the gold patterns.

The inside was a deep purple shot with black shimmering fabric which doesn't show up well but take my word it looked fantastic. It was finished off with a tiny gold braid. I hate to blow my own trumpet here but I was really pleased at the way it all came together and the photos don't do it justice I tell you. I can't be good at everything. 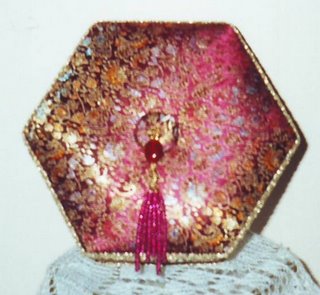 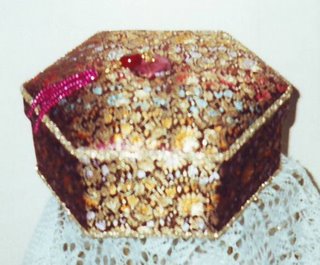 Girls, if you could just see the house where it is going to live. Antiques from Europe and Asia, Primitif Art from Africa all lit with glorious forms of glass lights but they like that I make their gifts. That dress really is a beast to wear but I feel so good in it.