HOW TO CRUNCH AN ECOSYSTEM

Tristan Da Cunha was named for Portuguese sailor Tristao do Cunha who discovered the islands in 1506. The circular island is surrounded by 1000-2000 foot cliffs on a coastline of 21 miles. It's dominated by Queen Mary's Peak, an active volcano that last erupted in 1961. The group of islands making up the Tristan Da Cunha group lie midway between Cape Town, South Africa and Buenos Aires, Argentina in the South Atlantic Ocean. There are species here not found anywhere else in the world.

A message was received at Tristan on the 22nd May from the master of TG Mighty Deliverer which said that due to bad weather TG Mighty Deliverer was forced to release the platform rig PXXI at 35'48S 013'35W to avoid risk to the platform and his ocean-going Tug Boat.. The platform was released at sea unmanned with no onboard fuel, thus contamination free. The total length is 104.9m, breadth 103.63m and draft 13m. 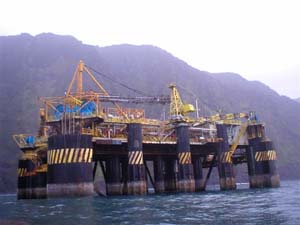 The Platform was found at Tristan on the 7th June on the SE side of Tristan at Tripot Gulch.. The Rig was visited by Tristan Officials on the morning of Thursday, 08 June 2006. She was grounded approximately 300m from the shore. There did not appear to be any oil leaking, only a small diesel slick. It was grounded directly off the Trypot Rock Hopper penguin rookery but the penguins had already left the island.

The Tristan Da Cunha Government then announced that the oil rig that had been stranded on Trypot Reef to the south-east side of the Island wasn’t going anywhere. And there were fears that any pollution coming from the rig could cause Yellow Nosed Albatros deaths and other birdlife fatalities on the Island on the outlaying islands of Inaccessible and Nightingale 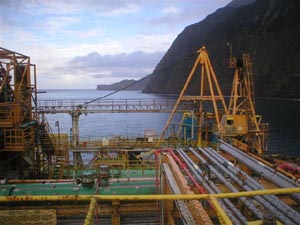 The Tug Zouros Hellas departed Tristan on Saturday the 29th July without being able to remove the rig.

In September the South African research ship SA Agulhas arrived with Marine Biologist/ Photographer Sue Scott from Scotland and Geoff Fridjhon from South Africa to do an Environmental Assessment. However due to bad weather conditions they were not able to do much surveying at the rig because of heavy swells breaking in the harbour and around the island. Since the tug departed the island the rig had tilted slightly to seaward.
Two dives took place on the 21 and 22nd September, the first dive was without underwater cameras as it was considered likely that they would be damaged, due to the heavy swell and poor visibility. Although the dive ended after only ten minutes, it was useful as considerable marine growth was seen on the legs of the rig. 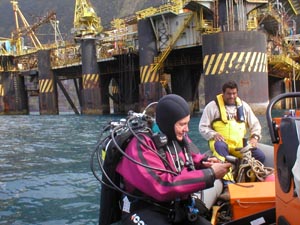 The outcome was, there appeared to be more growing on the legs than originally thought, the legs were coated with large quantities of dead coral, barnacle and oyster shells, while the horizontal sections had less coral but more oyster and other bivalve shells, a few small hard corals, a few large mussels, large dark red anemones etc, some which at depth were alive, and are non-native to Tristan.

So the timetable was….30th April the rig was released, the crew had it in sight until 16th May. It was briefly sighted again on 30th May but lost until June 7th when islanders discovered it on the reef. The Salvage tug departed Tristan on 29th July without salvaging the rig. Environmental assessment dives took place at the end of September but as far as I can find out the rig is still grounded at Tristan da Cunha.

Since we have satellites that can pick up a fly on Saddam’s nose I can’t understand why this wasn’t picked up while drifting around the Southern Atlantic or why it wasn’t fitted with a GPS chip or why the towing tug wasn’t prepared for bad seas in an area that’s notorious for them. The bottom line is that Tristan da Cunha is now threatened by an invasion of foreign shellfish that puts the ecosystem of the islands at risk.

its nice to hear from people who are constantly aware with the nature of thier work and tried to help protect marine ecosystem in every little way the can.

keep up the good work!!!

Chalacuna, a lot of this post was taken from the Tristan da Cunha News but I was alerted to the dangers of the rig from an article in New Scientist magazine so I went looking for more information.

Interesting. If anyone is wonder about Tristan da Cunha, I did write a bit about it with a link to the islands website.
http://highriser.blogspot.com/2006/05/todays-geography-lesson-tristan-da.html