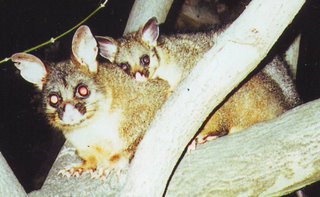 These are Brushtail Possums in my tree before it fell down in the storm. They look cute but they bite because they're too stupid to know when a person is trying to help. I accidently locked one in the house a few months back and I woke up to rustlings in my curtains and there was a tiny one trapped. Do you think it would let me help, not a bit of it. It finally ran into the sewing room and shot to the top of the curtain rail so I opened the window, knocked the screen out and shut the door thinking it would find its way out. About 3 in the morning it fell in the middle of my work table, knocked everything on the floor and still couldn't find an open window right next to it. I finally got it through but it hooked its claws around the frame, so I'm trying to shut the window and unhook the claws but as I got one undone, the other would latch on. I felt like a cartoon character but I got it shut just enough and left the little twit plastered to the glass. I heard it fall into the bushes about 10 minutes later. 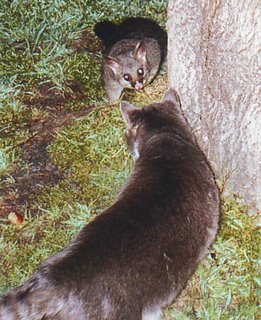 This is my dear old cat, Lord Greystoke eyeballing a baby who wasn't going to let a cat get in the way of apples and honey. He didn't chase it, he just watched it eat. I've only had one ringtail possum come to forage, mostly it's the brushtails. I just wish they wouldn't traipse over the phone line and crash on the roof. They make an horrendous sound when they fight, like a miniature werewolf, especially if they're just outside the bedroom window. I have to say, Janet, they are cuter looking than American possums.
Posted by JahTeh at 6:09 pm

A possum decided to come down my chimney and make its home on the bed of ashes (the fire hadn't been lit for a while).

I couldn't get it out and had to get WIRES in to do it.

Oh that 3am banshee growl they do while sliding down the roof, bless their beady little eyes.
I care about animals.
One wet sunday morning at 8am while gazing out my window at the golf course across the road, a man pulled up, got a cage out of his car boot and let a possum out of it. Stupid bastard, the possum went under his car OF COURSE.
He got back in to drive away and I streaked across Dendy St faster than The Lithgow Flash, reached in through his window and ripped the keys out of the ignition.
When he came after me I threw the keys over the fence into the golf course and then it got really funny - the fkn cops came along would you believe it.
Possums are territorial. They die making their way back to their old home if they are dumped in a strange place.
Vinnie of Brighton will be hounded by vicious possums for all his hereafter.
Copperwitch on the other hand, will have warm, furry possums for footwarmers in heaven for her kindness.

Awwww. Really cute. I can imagine the sounds, though.
Talk about cute, and being in the house: I had a chipmunk come in one day through an open door. Of course like your possum they don't know you are trying to help. These guys are FAST and they climb everything. So the end result was getting him in the bedroom and when he climbed up the screen it was opened from below.
Absolutely no cat can resist a chipmunk. They scurry across the ground in a jerky fashion, flipping their tails as they go. Absolutely irresistable, even to my cat who hasn't a hunting bone in her body.

I don't think you get ring tails much where there are the more aggressive bushies. 1982 in East Malvern, do you think we could cover possum piss on the ceiling with water based paint? No way, no matter how many coats.

I bet you all didn't believe brownies could be mischievious not to mention bloody dangerous when roused.

Janet, chipmunks, tell me do they really chitter as in make a noise?

There are no possums in Qld Ron, but near nekkid yummies is a good substitute. The brownie and I will still visit.

Henry Bolte looked like a possum. With the body of a wombat.
There's an election here tomorrow, and Lord Ted with his Cary Grant chin and HUGE HEAD OF HAIR will get the ladies vote. For sure.

Steve Bracks looks like every personnel officer who never gave me a job.

Rh, how could you mention that hideous little man's name on my blog? Ted the Toff doesn't do it for me and I hope the Greens will massacre Fundies First.
Bracksie just needs a little reminder who put the party in Parliament and who keeps it there.

I've been pee'd on by a possum. Can't say I remember the smell, but I felt very lucky. Brownie your story makes for an interesting series of images. You are mischevious, if I did that to a perfect stranger I'd be deported to Gitmo at worst or fined thousands and thousands of dollars and thrown in the slammer. Brownie's can get away with an awful lot methinks.

Linky, I'm sillier than a scientologist. I honestly think that every species has an equal right on this planet.
I have attacked other people for hurting animals too.
Isn't that Lord Greystoke a handsome cat?

Jahteh, They are dangerous critters, no-matter how cute!
I've done many possum rescues and raised a few as a wires person. I've been bitten, scratched, climbed like a tree,had wild goose chases in rooves!
Trust me when I say that wild animals have no idea when we are trying to help them.
I would rather rescue anything, but a possum(or a sugar glider!).
They do become tame faster than other wildlife though, tempted by food, you can tame them pretty swiftly.
Yes, they are dangerous, i'm glad you didnt get hurt by the little one in your home, I had a friend killed by one that tried to hide under her brake pedal of her car as she was retrieving it on a rescue(the days when we didnt have strick standards with wires)
Link, possum pee smells like eucalypt leaves and it's really nice smelling actually.
Andrew, Brushies and ringtails do cohabitate without any problems,its just that ringtails live in understory like melaleuca and paper-bark so they can build their dreys in them.
Without understory you tend not to find any ringtails.

I must remember not to try to rescue a brownie any time soon.

I love that your little boy loves the wild animals Zoe. I knew mine had left home for good when he took his collection of pickled spiders with him.

oh RH you are such good value.
I met Helen Balcony at a grogblog and can assure you she is a completely A-grade person in every way.
You must have upset her to get banned.

I had one of my animal rescue moments involving a balcony too. In a Very Top Postcode terrace house row.
A very small puppy was on the balcony of the house next to one I had been a visitor to from lunch to midnight.
It was whimpering in the cold and dark so I swung from my friends balcony to the one next door, let the puppy in the house through the balcony doors, turned on every light in the place and let myself out.

I wish I had seen their faces when they got home.

(re the swinging: it was in my younger days)

When you get on the bottle everyone's A-grade.

But listen, I've had comments deleted, and later when I've had a think about it I've agreed with it. And that's okay. But altering a comment -or vandalising it, is the ultimate in smugness. The meanest arrogance. And most serious abuse.

Jahteh, I don't know why your husband ever left you.

You know Ron, you had the makings of a great children's book about the possum in the chimney.

Brownie, are you sure you didn't meet RH in Pentridge? How did you get away with all your hijinks and speak to Ron, I see another great book in this.

RH is this the first or second banning from Helen? I saw the comments the first banning and I echo the brownie, Helen's a nice lady. How could she be anything else, she has red hair.

Is that right? Golly, maybe I should go for the hat trick? ha ha ha. But look, first second or twentieth, who cares -I don't, we're talking small change. On the other hand, there are bloggers so interesting, so funny, so very real to me -that I'd go on my knees to apologise. And have.

Miss Brownie visited me in pentridge, but doesn't remember it. She was on day two of a four day bender. And when they ran the metal detector over her all the sirens went off. How embarrassing. Yes, but not for her; oblivion is something that never happened.

RH, don't encourage the brownie, she's bad enough as it is and probably learnt much of it from you.

Holy Cow, this conversation has strayed so far from possums and chipmunks that dare I answer your question about the sounds chipmunks make?
The do make a chip, chip, chip noise when irritated. It's loud and bird-like, about 1 second apart, is a very big sound considering their small size, and can go on for many minutes at a time. The sound is like the sound you can make when you loudly kiss the back of your hand (mind you, us biologists and birders do that regularly out in the field to garner the attention of both songbirds and owls [because it sounds like prey]. I wouldn't recommend demonstrating it in a public place.)

Thanks Janet, I wish I could do Youtube for you to let you experience the gruesome sounds of our possums.

Yes, and I could show you all the scars I have from the little blighters, Janet!
Are chipmonks placid when cornered?

I can't believe how proficient I am getting at finding things on the internet.
Here's a pretty good and funny video that shows you how fast these buggers are. This guy stuffs two or three nuts in his little cheeks.
http://www.youtube.com/watch?v=i0djRMZGxME&NR

I'll see if I can find one with the sound.
Zoe, no they don't settle down; they just climb up curtains, chairs, screens, etc. very quickly.