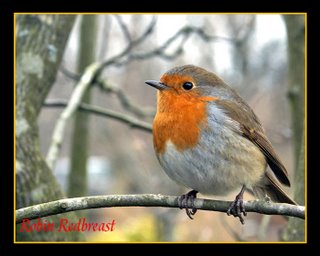 Holly with its thorns was revered as a Christmas decoration for its supposed protection against witches and the forces of evil. Ivy and mistletoe were also thought to have protective powers. Folklore has it that a cutting of mistletoe hung in a baby's cradle would keep a child safe from Fairies.

Plum pudding came in for the protective powers too. Sitrring the pudding is supposed to make peace between squabbling children and adults.

The Yule log is the least followed of the old traditions. It was supposed to burn for the 12 days of Christmas and deter any witches who were abroad on Christmas Eve. Another Yule log tradition was to sprinkle it with brandy before it was lit, a libation for the old Gods who slept in the log. In the Victorian era, a chocolate cake made in the form of a log and sprinkled with sugar to represent snow was placed on the Christmas table in lieu of the burning log.

The Robin is always associated with the Yule log as it was believed to have first carried fire to the Earth. In the process the Robin singed its breast and it remains red to this day. To counter the old legend, religion stuck its nose in and the Robin was said to have plucked a thorn from Christ's crown accidentally pricking its breast and staining it forever. To the Victorians the Christmas tree wasn't complete without ornaments of Robins.

The Christmas Angel was supposed to wander the World on Christmas Eve searching for cold hearts to melt with love. In a room where the Christmas tree stood, a window was always left open a little for the angel to look in and see the angel ornament on the tree.

I'm not religious about Christmas but I love the old myths and traditions even if they have been incorporated into the "Child's" birthday. I hope they're never rejected for political correctness as we've lost too much of the old ways already. This year though we have a chance to check out a tradition I found last December. Link, it's up to you to check Ipod and see if he kneels at the stroke of midnight on Christmas Eve to celebrate the "Child's" birth.

... a friend wrote me that her school nativity display was created by 4 muslim girls ...
during my epic journey across Victoria today I had my first and only food at a Maccas on the M1 near Geelong. About 8 Indians were there - the women in saris and the men and little boysin turbans - they were all shreiking and laughing and falling about and having a high old time (about what, I don't know, as it was allconducted in their own language) and it was very pleasant to be near.

There was a man alone, with red patent trackshoes, red socks red jumper and he spoke into a red mobile while he ate. It wasn't Sammy Hagar or Mick Hucknell.
oh shit - I jes realise, coulda bin Sandy Claws! I shoulda asked him (was too weary).

Well I hope you made a wish just in case. I think it's chimney sweeps you have to brush for luck not Santy.