JUST ANOTHER DAY AT THE FRONT 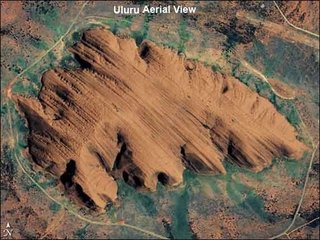 This is brilliant, a aerial view of Uluru. I've never thought of how it would look from the air and it's very different from the cute guy I clicked to upload. It has been that kind of weekend staggering over into Monday.

I've had to put up with a visit from the Blight which meant tidying up everything just to prove I don't need another him to look after me. He still managed to give the place a once over as thought he still owned it. Now I can officially call him a little twit. He's shrunk or should that be diminished. He was wearing shoes, I wasn't but I still found myself looking at his forehead and I've never been as tall as him. It must be the weight of all that money sitting on his shoulders. he's going to be a little old man, hahahahaha, what a hoot, all that money and he's never going to be anything other than a fat wizened up little twit (you can be both).

A visit to Mummy was the icing on the cake. As usual I stopped at the bakery for coffee and yes, I had a donut but I didn't have two. I'm improving. What I did have was a sneeze so grabbed the tissue from inside the bra, usual place since it will never fall to the ground. Also pulled out a cockroach. Now it wasn't inside the bra when I put it on, I'm not that dopey so it must have been in the kleenex box. I tell you somewhere in space is an orbiting 'roach. It's 2kms to the bakery so it's been warming itself on my ample boob for 2kms and I never felt a twitch. All clothes will be inspected from now on.

At least there is one bright spot on the horizon. I'm meeting up with a Brownie tomorrow and much hilarity will be heard from Surrey Hills. We both talk so much we'll probably have to use one of those timers that chess players have, to get equal mouth time.
Posted by JahTeh at 4:15 pm

Tell her camera face says hi. How many tissues do you stuff your bra with?

OK so we've been sent to Coventry have we? OK, no probs at all youse copper top sisters ina rms. (Well, no problems if'n you trollops think being cast out of the Will means nuffink!)

We do have a phone number!

Witches! Drowning is too good for them! Dunkin' witches?! Second only to dunkin' donuts. (Only dunkin' donuts taste sweeter ... allegedly ... but then again me taste is all in me north'n'south!)

(Inside family info Boxbrowniecameraface ... not so much tissues, more your recycled compacted newspaper bails.)

"It's 2kms to the bakery so it's been warming itself on my ample boob for 2kms and I never felt a twitch."

Were it ourself you wood've (sic) felt serious movement at the station.

Like we've said on more thn twelvty-ten occasions ... "we are totally unreconstructed" ... and adolescent!

Like we had anything to inherit except a mouldy half finished dungeon and the S&M gear still on layby.

No tissues, but I could use a couple of wheels the way gravity's dragging them downwards.

If you two came, who would we talk about? The Sedgwick family dirty linen gets an airing and how good does CameraFace look in drag. The day will fly by.

Ewwwww, JT! I reakon I would have flung mine 10 km into orbit! Didn't feel it twitching? It must have liked your warm titty and curled up for a nap!

Yes isn't Uluru beautiful, I saw it from the air when I went there for my 21st birthday (My dream trip) and it blew me away.......Do down load the original pic for us soon though! ;~)

Zoe, I can't even remember where I got this from but it was such a different perspective from the usual 'standing on the ground, looking up' that it fascinated me.

your picture reminded me of this one:

Thank you anonymous, I've saved that image and will post it.

There were cockroaches in Surrey Hills too and I was glad that I had experience of living in Sydney to save me from freakin out man.
None in my BRA though - not big enough.
What do Feng Shooey people hang about the place to repel roaches anyhow?

They clang windchimes, Brownie, you know the ones you put all the pegs on to stop the noise.