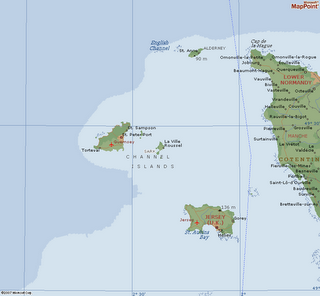 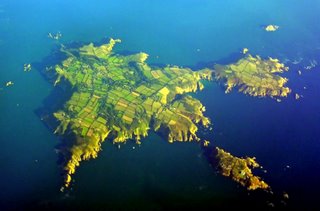 This is much better. The Island of Sark joined to Little Sark. Property ownership is based on a feudal system whereby the Island is leased from the Crown by the Siegneur - King of Sark - and is divided into forty portions, one of which is the Seigneurie - King's Palace.

It has no cars. There are no roads, just dirt tracks and short cuts across fields for the transport which is horse, bicycle, tractor or public transport, which is horse and cart.

There is a prison which can hold two people and you can still be hanged for stealing cattle. There are local gemstones including amethysts which can be found on the beaches.

If you visit Little Sark, there are the remains of the copper and silver mines, called The Pot. The Gouliet Caves are massive and extremely beautiful but it's not advised that you wander off as people have disappeared in the network of caves.

Brilliant me, I've just found if you click the map it gets bigger. How long have I had this blog and I just find out and the idiots want me to change to beta.

Don't do it, don't change, it's hard to post comments.
This blog thing is complicating itself into oblivion.

The computer just told me I had a serious systems error and that was it. Talk about sitting on a knife edge.

Anonymous, That is lovely.

You missed my point when I sometimes said 'click the pic for a better view'.

And Miss Jahteh
Who couldn't afford the penguins
At 2.99
Is my billion-dollar
Valentine.

Yes, I agree with RH about blog things becoming too complicated. Some of us still like bicycles with the old-fashioned foot brakes and vanilla ice cream, but alas, Blogger now gives us no choice.
Blogger is forcing everyone to switch to beta...it's being implemented in stages, and your number could be up any day now, JT.
http://diamondgeezer.blogspot.com/2007_02_01_diamondgeezer_archive.html#117039980149114976

JT, I thought of you when I ran across this. Now, it's a YouTube so you will need to wait, but honestly, it's the most amazing video. Just read the comments there to get an idea.
It shows an animation of the replication of DNA in a manner I have never seen before. The narrative is also excellent. Even on dialup, it is VERY much worth the wait (the video is three minutes).
http://scienceblogs.com/pharyngula/2007/02/dna_wrapping_and_replication.php#comments

Anonymous have you ridden a bike lately, if foot brakes are old fashioned so is electric light.

You'll have to do better than that.

And hey, I've never owned a bike that had "foot brakes and vanilla ice cream."

perfume can backfire on you and get you the opposite result of that which you hoped for.

The first thing you need to do is do some homework, meaning research. Look at your lady's perfume bottles, the ones

that are nearly empty will be her favorites. If there is one there that is nearly full chances are she doesn't wear

it often or doesn't like it. Hint around and ask her what types of fragrances she likes and dislikes.

Humans are very sensory oriented and our sense of smell is no different. Certain perfumes can elicit strong

reactions in both the wearer and the person reacting to the scent. Perfumes are made not only to attract but to also

relax someone. If you aren't totally sure what kind of perfume to buy you can always play it safe and get something

in the aromatherapy line. If you go this route, bear in mind that vanilla scents are considered to relax and a

peppermint or lemon scent will be more stimulating.

And Miss Jahteh
Who couldn't afford the penguins
(At 2.99)
Is my billion-dollar
Valentine.

But actually, I think it's rather good now.

I'd love to visit Sark. I'm a great fan of Mervyn Peake and he lived there for quite a while with his wife Maeve. They were genuine oldschool bohos. Get a copy of his biography "A World Away" by Maeve if you haven't read it already, you omnivorous mind you. And Peake's book "Mr Pye" is a fantastic romp set in Sark.

But Andrew I thought that was something clever that you did yourself.

My bicycle had foot brakes, my size 10's firmly planted on the road. I never felt safe with hand brakes. Now you can have at least 10 different flavours of vanilla ice-cream and if they want me to change to beta they're going to have to come here and do it for me.

Thank you, my one and only valentine, RH.

Helen, I've had a love affair with the Channel Islands ever since Bergerac went to air.

Kurt, 3 minutes takes me about 30 minutes to get but if you say it's worthwhile I'll do it.

Perfume Creed is back I see but I'm sticking with YSL Opium, it's the only thing I wear to bed.