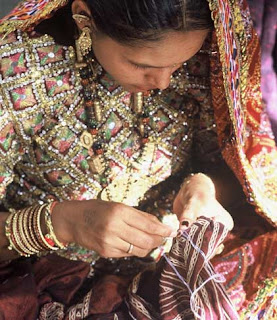 Chanda Shroff, Rolex Laureate, aged 73 is a woman with faith in herself. In 1969 she set up Shrujan - Sanskrit for creativity - to promote and save the Kutchi embroidery techniques.
Kutch is virtually an island in a corner of the Indian state of Gujarat. It is bordered to the south by the Arabian Sea and to the north by vast salt deserts.

Embroidery here is for personal, social and spiritual expresson and traditionally, embroidered articles formed an integral part of a girl's dowry. There are 16 distinct styles, vigorous, bold shapes, designs from mythology, curvilinear motifs of peacocks, parots, scorpions, elephants and flowers, geometrical counted thread and the use of tiny mirrors stitched to the cloth.

Chanda Shroff has a teaching diploma in crafts and started by providing 30 women from one village with raw materials and assistance with designs. Today Shrujan has helped 22,000 women from 120 villages across Kutch. The craftswomen primarily use silk and cotton to create high quality work and each craftswoman is encouraged to stitch her name into each piece. The national recognition and the income from the sale of the embroidery have brought the women respect in their communities. It allows them to invest in land, pay for health cae and improve nutrition for their families.

The second phase of Shrujan is to inspire younger craftswomen to keep creating. In 2004, 1,200 hand-embroidered display panels representing the different styles were made. Each panel, measuring 90cm by 120cm, took between three months and a year to complete depending on the complexity of the design. About 600 rural craftswomen took part including 85 year-old Parma Balasara who was one of the first to join Shrujan. The co-operation of these women also began to break down the caste system still operating in the rural villages.

Chanda Shroff is using the money from the Rolex award to fund a mobile resource centre which will take selected panels to craftswomen, many of whom are not permitted to leave their villages. A preliminary collection of 50 panels has already been taken to nine villages and self help groups are training the women to assume the roles of designers, saleswomen, entrepreneurs and teachers. There are also plans for informal craft schools to overcome the social isolation of women. Small groups would attend the schools for a three-month cycle.

Shroff was chosen as a laureate for her plan to ensure the survival of an art form flowing on to create a sustainable source of income. In her own words, "a support system for home-based women, as well as a reminder of the creativity and potential inherent in all women". Her aim is to bequeath a legacy that she hopes will survive for thousands of years to come. 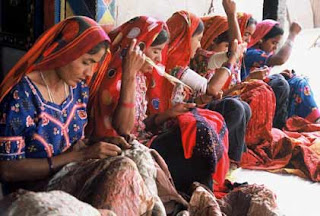 The Rolex Awards for enterprise were initiated in 1976 to commemorate the 50th anniversary of the waterproof oyster chronometer and to encourage human endeavour.

This art/ technique is so beautiful what an honour to have an awars like this.

What amazed this lady the most was how craft broke across the caste barrier which is not suppposed to exist but still does.

These women I've been writing about are starting to make me feel totally inadequate. I'll have to buy a copy of anything with Britney, Paris or the Olsen twins to get a superiority fiz.

wonderful and just imagine what agreat time a gossiping you could have amongst all those mates...

Get a group of craftswomen together and throw in a panel like this and there'll be 50 different ideas in an hour. Tracy Marsh made a lot of money putting out her easy to do craft books but it cheapened real craft. I've had people look at my work and walk off saying "I could do that" and I've felt like yelling "No you bloody couldn't".