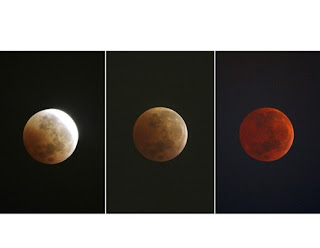 This is the best series of images of the March 3rd lunar eclipse that I've seen so far. They were taken from New York City. I should give the photographer credit but I forgot to write it down.

Michael Zimmerman is the dean of the College of Liberal Arts and Sciences at Butler University in Indianapolis. He is also the founder of Evolution Sunday where Christians hold special services to celebrate Charles Darwin's theory of evolution.

To Zimmerman, the biblical account of creation is allegorical. "Creationists fear that if you believe evolution, you're an atheist," he says. But he believes that trying to prove God exists by using the intelligent design argument signifys lack of faith.

"If you have enough faith, you don't need science to prove God exists, and science can't prove this anyway," he says.

That's exactly what religion is, faith in something you can't see or touch, faith in a God that can exist only by people believing that a God exists.

I don't believe in anything much except that we have the ability to take a leap of faith and believe in ourselves.

I have always wanted to follow the eclipse as it happens around the world.

As for faith, It's personal and it's also sacred. So just follow your own heart!
Thats what I do!

I don't know what's wrong with these people, that they have to prove my god is real, your god isn't. I prefer to look at the moon.

wow...have a look at Mirks's (my links) he did ohotos from scotland if the eclise...have to click on them to enlarge

After the eclipse Saturday night, the moon seemed brighter and and crisper than I have ever seen it before. Perhaps it was because of the cold winter air.

Synaesthesia
One spring night I grabbed a lawn chair and a glass of wine and watched an entire eclipse. Thousands of fireflies lit up the adjacent field, teasing me with a silent Mozart concerto; all around me meadow voles bustled about, doing whatever it is they do in mid-June in a hayfield; and as the eclipse reached its climax the night light took on the most amazing quality. It was as if the woods were in a slight mist, bathed by the light of a distant flourescent lantern which had been cloaked in white onionskin or tissue paper. Everything was muted, yet crystal clear at the same time. The shadows you'd expect were certainly present, yet they were brighter and the highlights were darker. And the light was not white but an icy blue. The best word I can use to describe it is ephemeral. I doubt I will ever experience such a thing again.

Well yes, Warren, I suppose that's a better word, especially since a heavenly body was involved.

JahTeh, don't listen to a word this idiot husband of mine says. He can't get anything right.
I was watching the eclipse with him that night. And I heard no music. And we were lying on the ground in the hay. And there was no climax even though I waited the whole night. And we HAVE experienced it again. And again.

No. I'd say ephemeral perfectly describes the occasion.

To the moon, Alice, to the moon!

I wish we had voles. They seem so...exotic.

Yes, Phil, they are.

They are also very erratic.

Meadow Voles? Are you sure that was just a glass of wine and not a flagon with just a hint of chemical assistance?

Meadow Voles, you're right Phil, they do sound exotic and sort of 'Harry Potter'like. Weren't they mentioned in 'Wind in the Willows'? (2nd fav book to Harry, call it arrested development)

Middle child, I saw a wonderful one with the moon in one corner in contrast to the brightness of Big Ben. We've had some great apocolyptic stuff this year, blood moon, amazing comet tails. Does this mean the demise of the Rodent?

It was just a nature high.

In fact, in the 70s I had to walk out of a campus showing of Monty Python and the Holy Grail because I couldn't handle the smell of weed in the theatre. Never could. Yes, I am a shameful specimen of the sixties. (I am sure that watching someone's torso spurting out blood to a distance of 10 feet had absolutely nothing to do with my leaving :)

Really, though, the quality of moonlight that June night was just as I described it.

I had to look up blood moon. Keep those astronomical lessons comin', old girl.