2007 is International Polar Year and an Australian, Dr. Michael Stoddart, is a leader of the Census of Antarctic Marine Life which is a project of the global Census of Marine Life. At the end of 2006, the research icebreaker, Polarstern, explored the underwater seabed exposed by the collapse of the Larsen A and B ice shelves, the former in 1995, the latter in 2002. The image below shows the broken connection between the Larsen B ice shelf and the Antarctic Peninsula. 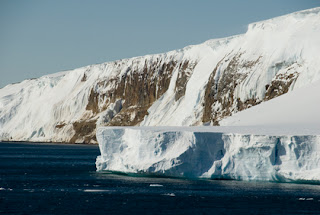 When Antarctic glaciers reach the coast of the continent, they begin to float, becoming ice shelves from which flat topped icebergs calve. Since 1974, a total of 13,500 square kilometres of these shelves have disintegrated along the Antarctic Peninsula.

The Polarstern researchers, 52 scientists from 14 countries, used sophisticated sampling and observation gear including a camera-equipped remotely operated vehicle which revealed life on the uncapped sea bed. Nearly 1,000 species were collected including several which may be new to scientists. One of the aims of this expedition was not only to record indigenous marine life but discover which organisms were moving in. The ocean floor had been sealed off by the ice shelves for 5000 to 12000 years and now scientists can observe the impact of climate change on marine biodiversity and ecosystems.

One of the presumed new species is a sea anemone co-existing on the back of a snail in a symbiotic relationship, providing locomotion for one and protection for the other. It will need extensive analysis to determine if it is a new species. 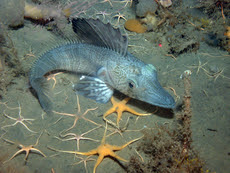 The image above is of an Antarctic Ice Fish. It has no red blood pigments and no red blood cells. This means the blood is more fluid and the fish saves the energy needed to pump blood through the body. The sea bed is covered in brittle stars, two of which have been overgrown by a yellow sponge.

One major find were small clusters of dead clam shells which pointed to the presence of a rare 'cold seep', a sea floor vent which releases methane and sulphide. The opposite to the hot black smokers of the Pacific Ocean. The seep provides a temporary habitat and when it extinguishes, the community starves. The clam shells will be studied to determine their age and life span of the colony. Only one other cold seep has been discovered in the region, at a depth of 830 metres on the continental shelf.

There are 13 voyages scheduled for this International Polar Year and http://www.sciencepoles.org has been selected as the Internet reference for general polar research news and information.
Posted by JahTeh at 11:04 pm