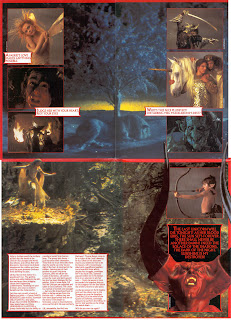 After writing about Ridley Scott's 'Legend' I decided to go back and read his take on making the film. In one of the book sales I used to haunt when I had money to spare, I picked up Paul M. Sammon's book "Ridley Scott, Close Up, The Making of his Movies".

Legend was the first film he made after Blade Runner (another favourite) and was originally to be named "Legend of Darkness". After an extremely bad test audience review, Scott was forced to cut 20 minutes from the film ruining its continuity and in Scott's words making it "a bloody disaster".

It was disappointing in theatres but was popular with home video viewers, generating numerous websites with one of the best FAQ site being http://www.figmentfly.com/legend/index.shtml

One of the features that I loved was the ever moving golden wisps through the forest which added to the fairy/dreamland quality. Scott did this by chopping up duck feathers, letting them float against the backlight of the sets.

The film also has, in Annabelle Lanyon, one of the fairest fairies ever put on screen. She makes Julia Roberts' Tinkerbelle in Hook look like an elephant with wings.

Scott's idea for the make-up for Tim Curry's 'Darkness' came from Walt Disney's Fantasia. The winged horned demon from the 'Night on Bald Mountain' segment. While I love that music now it was another childhood nightmare for me.

Variety reviewed the film in August, 1985, calling it a lavishly produced but thin scripted fantasy but not condemning it altogether. The review also praised Jerry Goldsmith's score which had been replaced in the American release with a "New Age" score by the German electronic group, Tangerine Dream. Goldsmith didn't speak to Scott after that. There is a Director's Cut on The Ultimate Edition DVD and Goldsmith's score is restored.

I can't remembered whether I have the European or American version so it's into the video library to hunt it out. Even with Tom Cruise in it, I love the film, in fact it's the only film with T.C. that I do like.

You would love this film apart from the unicorn getting shot with an arrow but it gets to live in the end because the horses are gorgeous.

I'm back! Legend was a favourite of our two girls and us...they tracked down some DVD copies a yer back and watch it occasionally...iys a beautifully made film

MC, thank goodness, another fan of Legend, I was beginning to think I was the only one. I hope everything is going steady for you at the moment.

I am going to have to track this down. It looks beautiful and I loved the imagination of Blade Runner.

Mikhela, ignore Tom Cruise, Mia Sara and the horses were beautiful and the costumes/makeup for the others were fantastic.