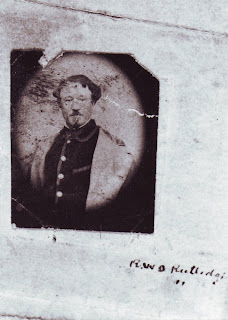 This is from the ex's side of the family and I was lucky I had a couple of copies made. It was a tiny photograph tucked in the family Bible and I had it photographed to get a negative. The Bible was one of those huge Victorian decorated ones but it was thrown up into a musty cupboard and left and when I finally got my hands on it, a lot of damage had been done. None of the photographs were labelled, a piece of silk supposedly from a flag made during the War of Independence couldn't be verified but the marriages and deaths had been filled in, after a fashion.

Even though the outside cover was made of tooled leather, the spine was broken in places and it was fragile to handle much. In one of my more genius moments, I consulted with a carpenter friend about making a Bible Box to keep it in. My idea was to make something that would fold out, letting the pages be turned but not actually having to pick it up. We finally came up with the idea of using piano hinges. The sides of the box were fixed but the front, top and back side were fastened with the hinges and the whole lot folded out flat, making it easy to go through the pages but never moving the book itself. My father-in-law who had shown no interest in the family history before, said thanks very much and took the box home (I paid for it) along with all the photographs and documents that I had put into acid free paper. He was a selfish old creep.

But I had kept copies of this photo but not the document that came with it although I copied the words. He wasn't from the South but from Chicago and that's all I know. From Civil War history I would say it was taken by one of the battlefield photographers as many of the soldiers were.

Impromptu, as I seal this letter.

That's another project on the backburner to look up any battles around that date and try to trace Officer Rutledge even though he isn't my side of the family.
Posted by JahTeh at 12:57 pm

I am attributing that typo to the fumes from the Bombay Sapphire of the previous post; excellent poet that R.W.O Rutledge is, I don't think he was writing it in 1963.
(delete this comment after you fix the typo, please.)
Rutledges were big in Illinois (oh Sweet Home Chicago) and there is a town named that.
If you Google (Rutledge+Civil War) it will all unfold for you.
Ann Rutledge was apparently engaged to Abraham Lincoln; and there is an entire Rutledge Family Civil War website.
Many Civil War soldiers got to Australia and some are in Ballarat Old cemetery.

Thank you Eagle-eye, fixed.
Equally nice Bombay glass coming up in the next post.

"Family Trees" are addictive, and can keep the dedicated insomniac tapping away at the keyboard for several years .. heh. Am not quite back to "Adam" yet - earliest records are 1580, and have about 380 "names" in mine at the moment.

Started in 2004 with a $10.00 program on CD, but have recently downloaded the "free" version of "Legacy" which is the better program. Would also recommend Genes reunited. A UK designed online resource (but needs a small subscription $AU19.00/year, from memory. Much better than the extraordinarily expensive Ancestry.com). Amazing the number of people all over the world linking in to the same family names.

I'm not very good at this family tree bit especially since it's his family but I'm more curious about the Civil War and what part he played in it. I can see by the clothes, he's an officer. My side of the family is proving a problem, Brownie's got a South Australian Lutheran that might be connected and then there's the French side. That marriage certificate was originally damaged so it's hard to read. Trouble is my interest started after everyone who could tell me anything had died.