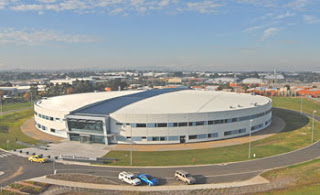 There it is, our lovely $207 million Australian Synchrotron. If you think that's a little expensive just remember what the Federal Government is spending on advertising its grotty policies that no-one wants. The synchrotron is right next door to Monash University in Clayton where some of our best researchers are working when they're not wasting time by flying all over the world to other countries to use their synchrotrons.
This is a 3-giga-electronvolt (medium energy) light source and is the largest in the Southern Hemisphere. It has the capacity for more than 30 beamlines. Nine have been proposed and five have already been installed ready to go in July 2007. They will be used for high-throughput protein crystallography, powder defraction, X-ray absorption spectroscopy, soft X-ray spectroscopy and infrared spectroscopy. All of these are used in forensic science, drug design, radiation therapy and IVF studies.
Daniel Hausermann, a Swiss physicist was recruited to design one of the beamlines. The 150- metre-long medical imaging beamline will help to deliver more precise and effective radiation therapies and detect cancers near the single cell stage. At the moment a smear test for cervical cancer already contains numerous cells. To image and diagnose a single cancer cell would mean less invasive treatments.
The Australian Government has promised $50 million over the facility's first five years of operation. That's $50 million over five years and it's only promised not granted. For the scientists and researchers using the synchrotron, fighting for every grant dollar will still take up to much time better spent on their work.
Posted by JahTeh at 11:36 am

We were watching a story on the synchrotron on tv and we found ourselves strangely excited about it and what it can do.

When you know that using this can look into the stomach of a mosquito, then into the contents to find which enzyme is converting our blood to its food, then into that enzyme to map how it converts the haem which the malaria parasite loves then look for a way to disrupt the life cycle of the parasite with a new drug instead of spraying deadly insecticides all over. The Federal government was going to give more but it wanted it built in Qld for political reasons, as usual.

the federal government will give a $50 million cheque to the victorian government for synchrotron operations by 30 june, as promised in the federal budget, so your smart crack about promised not granted is a fantasy