A meteorite smashed into a valley in central Italy in AD 312 and a Swedish geology team thinks it might have benefited the Christian church. To the Romans, the meteorite would have looked like a bright flaming object in the sky, even in the daytime and would have struck Earth with the force of a small one-kiloton nuclear bomb and may have even looked like a small nuclear blast with mushroom cloud and shock-waves.

The geologists think the formation of the crater coincided with a celestial vision which church history recorded as having converted the future Roman emperor Constantine to Christianity. Old records say that Constantine was praying when he saw a cross of light in the heavens, above the Sun, inscribed with "conquer by this". This event was witnessed by him and his army just before a decisive battle in the civil war with Maxentius for control of the Roman Empire. Constantine took this as a sign of divine help from the Christian God. He later stopped the persecution of Christians and officially approved their religion. 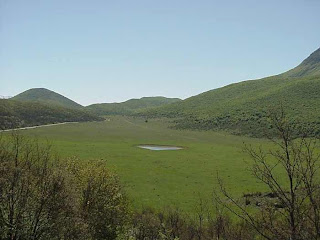 The geologists were exploring a small crater lake in the Sirente Plain and determined that the round depression had been created about 1700 years earlier. The geologists found the main crater surrounded by numerous small secondary craters gouged out by debris ejected when the rock smashed into the ground. Magnetic anomalies detected around the secondary craters were probably magnetic gragments from the meteorite.
The Sirente crater field consists of about 30 depressions with a main rimmed 120 m-diameter crater. Seismic data from the main crater support the meterorite impact interpretation but there have been other hypotheses. 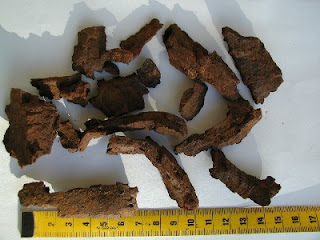 A close field inspection found that metallic fragments could be sampled in great quantities (photo above) and the sampled iron splinters looked like exploded ordnance. The main crater has been dated but there is still debate about whether some of the smaller craters were the result of WW11 bombing. The ground around the Sirente area is soft and muddy and exploded and unexploded ordnance would penetrate to some distance and show up as magnetic anomalies. This complicates any attempt to retrieve meteorite fragments as digging or drilling anywhere near unexploded bombs would have only one result.
Further magnetic surveys will have to differentiate between these man-made anomalies and rocks from space before a conclusive decision on this crater field is made. 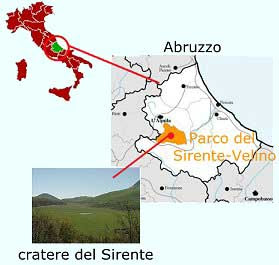 That's a relatively recent occurrence and all the more fascinating for it. Keep us posted with developments, CW.

Science is not the only thing that's moving around here... The loved one is away in Perth, I'm feeling sorry for myself, the vodka is good, and your blog is definitely staggering all over my monitor in a most suspucious manner... If I was sober, I'd say it was drunk...

Post coming up Lad litter on the biggest impact crater field ever found and two years later it's a bust.

My blog is frequently wandering but never drunk and what are you doing on Vodka?

I needed something stronger than the usual Cab Sav. Anyway, it was a one night stand with the Vodka. Back on the wagon now...

Bloody hell... I thought he just did it because he had a bad dream after getting pissed on cheap Italien Vino...

Aint history grand... I love it!

It was a while befoe he stopped the christian killing though. Bread and circuses, bit like a certain PM we know.