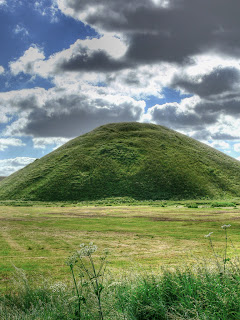 This is Silbury Hill, a huge Neolithic monument in Wiltshire, England. Its age is estimated at 4,400 years but archaeologists still don't know what it was for. They have reached the core of the hill where they've found blades of grass which are still green and sarcen stones of the same stone as nearby Avebury and Stonehenge which were carefully placed at every stage of the building. They didn't find a burial chamber of a Celtic King or any treasure.

The bottom layer was gravel, covered by three larger mounds of chalk boulders and chalk rubble. It was, at 40 metres high, the largest artificial hill in Europe. This was in an age when survival was day to day so I can't imagine why they would take the time and effort to create this.

Jim Leary, an English Heritage archaeologist, said the original builders left the site without any man made rubbish except for the antler picks used in the building. Dating of one of the antlers proved the structure was complete almost 1,000 years before the last arrangement of the stones at Stonehenge. The top came later, carved flat to take a Saxon or Norman building.

The once sacred monument will now be cleared of modern activity and exploration tunnels sealed.

Some believe that Silbury was built to represent the mother goddess, with the mound symbolising the pregnant womb, the writer Michael Dames has identified Silbury Hill as the winter goddess and Moses B. Cotworth stated that Silbury may have been used as a giant 'sundial' to determine seasons and the true length of the year.

It could be that it provided a means of following solar activity, as shadows were cast from its summit. Silbury is also at the centre of alignments for straight prehistoric tracks which the Romans bricked over and there's evidence of ancient Ley lines (energy grids) linking key sites in the area. 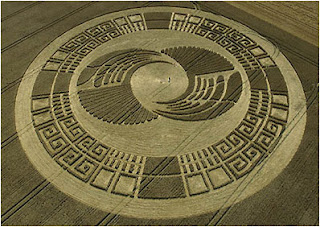 Near Silbury there was another mystery. On the 2nd and 3rd of August 2004, the Mayan Calender crop circle, voted one of the best ever made, appeared. Made by aliens, electro magnetice floating orbs or men with rope and boards, it still looks fantastic until you remember it was made in two stages not in one night.
There are two good sites for crop circles http://www.lucypringle.co.uk/ Lucy Pringle explores and explains crop circles and their effects on visitors. This site has a stunning collection of photographs of the crop circles.

http://www.circlemakers.org/ is the site of England's crop circle makers, the rope and board men but even they don't claim all circles as their own.


Civilizations rise and fall but mysteries go on forever.
Posted by JahTeh at 8:10 pm

Did you know that half of Silbury Hill collpased recently? Apparently amateur archaeologists back in Victorian times dug into it in an attempt to find out what was in there and then failed to refill the tunnels properly. The result, Silbury Hill now looks like my stomach first thing in the morning when I've just woken up. Sad but true...and probably very boring. It's your fault that I keep coming out with this crap, you know...if you will encourage me by posting this sort of stuff then you've got nobody to blame but yourself. Still, it's probably better than Sedgwick's stomach churning attempts at flirting...

Ah, I'd wondered where my antler picks got to. You can't get good ones any more, you know. I went down to Crazy Clarks and all they had were Korean replicas made out of gm-modified rats. Quite heavily modified I must say, but they just don't dig the way genuine antler does. It's the angles, you understand.

Gee, I was hoping for something. . . something more archaeologically compelling other than to hear from the esteemed Mr Hughes that his stomach be sad but true (and quite possibly boring).

If you like I could shave all the hair around my belly button into a fantastical geometric design, crop circle style. Just don't expect too much energy to start flowing down those ancient lay lines once I've done it, 'cos it's a bit cold at the moment, especially with the loss of so much hair all in one go.

I am looking at a green cone exactly like that, clearly visible through the window of the Camperdown library.
I think it's called Mt.Leura.
It's nice here. Well scenic.
peace and love from the talus cones.

That's what caught my attention. Another blunder by the aristocrazy, water streaming down the hole the Duke of Northumberland dug in 1849. I can just see all the Neolithic wags sitting around the fire wondering what to do to with all that chalk and antler picks. Of course the women would be too busy keeping the fire burning to worry about the boys with their toys.

Phil, I really must get my eyes tested or read more slowly, I wondered what the Koreans were doing with giant modified rats. I mean how much digging could you do with an antler pick? They filled 35 million baskets of chalk for this thing.

Caroline, just don't get his hypercaust going or we'll be here forever.

Hoho Annie, you can get emails at the library, I did wonder.

Thanks for this... the crop circles get more and more intricate and amazing...funny how we all just accept them... and cease to question...well most of us.