ONCE MORE FOR SAMHAIN 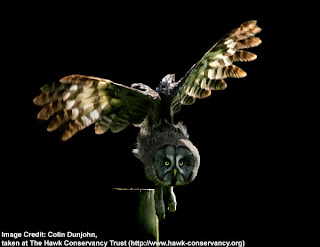 I couldn't let the hag's holiday go by without a mention of owls. The owl is often a guide to and through the Underworld, a creature of keen sight in darkness, and a silent and swift hunter. Associated with the "cailleach" or old woman/crone, it can help unmask those who would deceive you or take advantage of you. They played a role in early Celtic cults, predating the Greek cult of Athena but in later Gallo-Roman times lost the significance.

In modern Scottish and Welsh languages, the owl, by the etymology of the word alone carries negative connotations of death and darkness. To the Welsh, the Owl is a night predator. The only bird capable of defeating the falcon and then only at dusk, its time of power. The Owl symbolizes death and renewal, wisdom, moon magick, and initiations.

Their Goddess Arianrhod shapeshifts into a large Owl, and through the great Owl-eyes, sees even into the darkness of the human subconscious and soul. She is said to move with strength and purpose through the night, her wings of comfort and healing spread to give solace to those who seek her.
A star and moon Goddess, she was also a deity of reincarnation and karma. The Mother aspect of the Triple Goddess in Wales, her palace was Caer Arianrhod (Aurora Borealis). In Celtic folklore it is considered both to be sacred and to have magical powers.

In Greek mythology the Owl was a creature sacred to Athena, Goddess of the night who represented wisdom. The Owl sat upon her shoulder revealing unseen truths to her, lighting up her blind side, enabling her to speak the whole truth.

The Ainu in Japan trust the Owl because it gives them notice of evil approaching and mediates between the Gods and men. The Zulu and other West African nations consider the bird a powerful influence in casting spells, and think that using parts of the owl give great strength to a person involved with magical incantations. In the Middle East, China, and Japan, the Owl is considered as both a bad omen and an evil spirit. For Christians the Owl traditionally signifies the Devil, powers of evil, bad news, and destruction. In the Old Testament the Owl is an unclean creature that stands alone as a figure of desolation. In an Australian Aboriginal myth the Owl is the messenger of bad news but in the Americas, the Cherokee honour the bird as sacred because of its night-time vision, and wish to draw that power to themselves to see in the dark.

The Owl can see that which others cannot, which is the essence of true wisdom. Where others are deceived, Owl sees and knows what is there. As a symbol of the Goddess, Owl represents perfect wisdom. They bring messages in dreams. The Owl is the bird of mystical wisdom and ancient knowledge of the powers of the moon.

"The Owl is the bird of mystical wisdom and ancient knowledge of the powers of the moon."

The one that was sitting on my bathroom window ledge when I was taking a shower the other night certainly was. After studying my full moon for about ten minutes, it then left me an ill omen in the guise of a dropping shaped like Rolf Harris' head.

Thanks for all that JahTeh, although now I'm confused about the symbolic meaning of owls, as there seem to be quite a few I could potentially claim. I've had owls in different houses who have perched on a tree outside the bedroom window and then hooted at the house all night. Gotta mean something I reckon. But what? I had a dream of a spider that dropped off the wall, turned into a frog and then an owl who (who) then ran at my feet trying to attack my toes. I had to brush it away with a branch of gumleaves. He was about a foot tall, you now fluffy feathers, greyish, big eyes, definitely an owl. So I appreciate all the info.

Oh and BTW this word verification scrambled brain inducing trick, is really pissing me off. So far this comment I've had to do it four times. My connection often drops off/out, or goes walkabout, in the time it takes to do this and I end up losing all those pearls of wisdom. I cannae tell you how many effing comments I've made on blogger comments only to give up in disgust. GRrrr. So if I haven't responded somewhere were I should have. Well I probably tried, failed then threw in the towel.

A blogpost about the owl
Caroline nearly threw in the towel
Thoses owlses were crooning
While Hughsie was mooning
And that's about all you can say about it.

OK, back to work.

I bring a message from Barney, my hypoallergenic owlycat (owl/cat cross). He can actually use the computer but has asked me to impart to you that rage has rendered him unable to type. It has not, unfortunately, robbed him of his natural tendency to go on rather a lot. Anyway, in a nutshell, Barney (whose immigration application to Australia is, at present unresolved), wishes me to convey to you that he is not now, nor ever has he been a 'bearer of bad news'. I stress that this is HIS view. Given the bother he's caused me lately, I might have one or two issues with that one. Still, please consider yourself notified.

Darlings don't get me wrong here, I'm just stating a fact: Janet Rice's hubby has turned into a woman. True. And he sure looks funny. Well I don't know what wedding vows they made but this has to be some sort of insult. Meanwhile hubby Rice still has a doodle, but won't need to be cracking it anymore, and Rice herself has as much chance of getting into state parliament as I have of getting into The Veronicas.

Trust you to upset the Goddess in disguise with your hairy full moon, you're just lucky she didn't turn you into Rolf Harris.

Caroline, owls are good for women, we're all goddesses remember. Owls in dreams are good omens for us, bad for hairy poms.

Slow day at the coalface Phil?
You'd better watch out for Rh, he is the Poet Laundrette around here.

Pants, I love your owlcat and why are you having trouble getting him into OZ? After all we let that WMD George Bush in. I also love owls, they've had a bad press over the generations.

Rh, I'll have your report on Cup Day shenanigans and don't spare the insults.

Yes well I'll be reporting on the fashions: dog fashion and frog fashion. But what Toorak dame could spot the difference?

Dogs do it
Frogs do it
Even people writing blogs
Do it,
Let's do it
Let's dress for love!

You know I have this wierd thing about owls... we have a couple of stone owls in the yard and it really disturbs me if people turn them to face the house... may be crazy or what...but I have to turn them facing outwards and then I am comfortable again and forget about them....but people think they are "helping" by turning them back... don't know what thats all about...