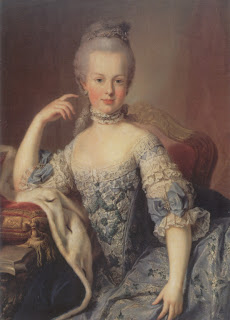 This is the Archduchess Maria Antonia of Austria, aged 12. She was a wild child, the Linday/Paris/Britney of the Court. She played piano duets with another wild child, Mozart. She was indulged by her governesses and what she wanted, she had.
The Bishop of Orleans, the Abbe Vermond, took on the task of educating her when she became betrothed to the Dauphin of France, grandson of Louis XV. The Abbe was firm but in the end he came to realise she would only learn so long as she was amused by the subject. A trait which continued all her adult life until the death of Louis XVI and it was only during her imprisonment that she began to show how capable she could have been in looking after the affairs of state had she had the education of another Queen, Elizabeth of England. 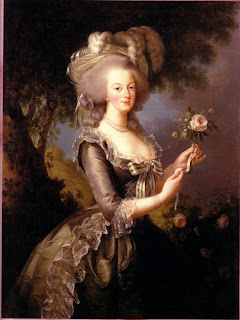 This is Marie Antoinette, Queen of France, painted by Elizabeth Vigee LeBrun. This is one of the most famous portraits of the Queen and the pose was repeated many times. It's thought to be the best likeness of her and Madame LeBrun has captured the unmistakable Hapsburg features. It was painted in 1783, six years before the French Revolution and nine years before her death under the guillotine's blade in October, 1793. This is the necklace to be auctioned on December 12 at Christie's. The collar is set with twelve button-shaped grey natural pearls which are mounted in gold. It has a fringe of twenty-one graduated drop-shaped grey natural pearls, each suspended from an old-cut diamond collet surmount to the diamond ribbon which intertwines the ruby collar. The pearls which date to circa 1780, belonged to Marie Antoinette. This necklace was fashioned in 1849 for the wedding of George Granville William Sutherland-Leveson-Gower and Anne Hay-McKenzie. 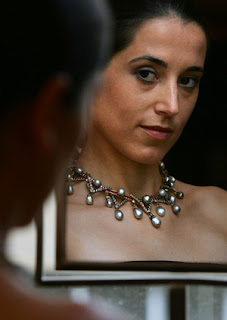 The pearls were never set for the Queen. She gave the pearls and diamonds to Lady Sutherland, Elizabeth Leveson-Gower, the wife of the British Ambassador for safe-keeping as she had diplomatic immunity and could be trusted to return the jewells to Marie Antoinette if she ever escaped France. The Countess of Sutherland had kindly sent clothes and linen to the imprisoned Queen after the failed escape attempt by the Royal family in 1791. The pearls have been owned by the family since then and it's rare that the provenance of such gems can be traced back over 200 years to the French Royal Court of Marie Antoinette.
As an end note to this, my great, great, great, great grandparents lived in Paris during the revolutionary reign of terror and I often wonder if they saw the execution of the Queen or were more prudent and kept their distance and their own heads.

That's obviously where you get your love of cake from then.

Not cake, French pastries and champagne and I have a phobia about sharp knives.

River, they expect about $800,000 but I would say more because of the Marie Antoinette connection.

If you have a knife phobia...maybe they didn't watch the proceedings...they may have been active participants... perhaps

Couldn't have been Therese, I'm a lousy knitter.

Hello dear blogger, last week I had to go to a boring conference about the importance of jewellery in the world and I have to write a paper on that and I lack of ideas so I'm reading your blog to see if your knowledge can enlighten me.