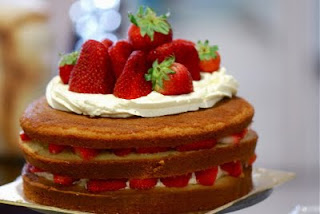 When the Bombay big blue bottle is nearing empty and looking at nekkid blokes is getting boring then I go to Su's blog and lust after the noms. I swear I could clear that plate without breaking a sweat.


Emotional crisis is easing to below hysteria level.
Financial crisis has eased thanks to lovely people who are so trusting they're prepared to wait until the selling of the house and settlement.

Still my bitching sister wants more.
Contents insurance is no more just the house is covered which saved us a grand total of $25 a month. Need I say she doesn't believe in insurance?
Monday I go to the bank with my best begging appearance and try to stop the payment of the mastercard completely until the house settlement.
All saved money will go towards the nursing home's new rates. Centrelink bastards are going to want backpay of this additional payment, right back to the day she went into care, 22nd August.

You notice who's doing all this begging and phoning, not sister and on settling day I promise myself she's going to get a mouthful.

The good ship 'Mother' sails on contentedly. Reading books, winning at Bingo and making lists of what she wants done with her worldly goods. She's off to the RSL for lunch next Friday and looking forward to the residents and family Christmas Party. I'll be sneaking in the Bombay via a water bottle.

Give the sister an extra mouthful from me, if she's not prepared to help with the begging and pleading at the bank and Centrelink then she can just...well, you know.
The strawberry shortcake looks delicious. I didn't notice a fork though. It's not a miniature that goes into the mouth in one bite I hope.

River, a fork? How unbelievably delicate, just cut it into four and shovel it using the strawberries to wipe the plate.

Something is going on with sister apart from the $700 tax bill she just received because of medicare but I'll probably never find out what. We have always been chalk and cheese.

The enduring attraction of the dessert illustrated, is the relationship of the 3 textures - sponge, cream, and fruit. Meant for each other. I love dessert.

Sisters are a mystery to this 'only child'. It would appear that sister takes after Mother, and you take after your father. because they are so alike, they don't get on.

A: The same bloody place.
so make it easy on yourself.

I'm with Ann - bugger it all to hell, have a sit down strike and let her who wants, wants, wants do something to earn it.
Go enjoy your mum's company and let your sister do the running around.
Stop.
Take a deeeeeeeeeeep breath.
Exhale.
Repeat after me
"I will help someone else realise their share of responsibilities by simply doing nothing".
She'll thank you for it.....really....

Annie O, that is right on the button but my sister would disagree. She thinks she is the image of my father and my of mother and physically she's right but not in nature. It is why she doesn't get on with mum but she'd never admit it. My father and I had the same birthdate and when he was coming out of the coma, I was the one who knew what he wanted before he could speak.

Jayne, I would but she works full time so it's up to me if only she'd shut her gob and let me get on with it. It's Friday and it's taken me all week to climb up out of the pit and I'm hoping to stay on top for a while.

And to all my online friends, if I ever get any money out of this I'm taking all of you to the Windsor for afternoon tea that includes you River, I'll send the train fare.

Damn, I forgot, ordinary afternoon tea or 'Death by Chocolate'?

Death by Chocolate sounds perfect. Chocolate cakes washed down with hot or iced chocolate. Then sleep for a week to digest it all.

Whether you give your sister a mouthful on settlement day or not, at the very least you know that YOU did the hard yards, not her.

Karma will arrive, JahTeh and in better forms than himbos, cake or gin (although they're not bad substitutes in the meantime)

Thank you River, one vote for 'death by chocolate'.

Kath, you didn't vote but I'll take it as 'death by chocolate'.
She can handle anything medical to do with mum but not the practical everyday stuff and definitely not the sentimental 'for Godsake don't throw that out' stuff.