THE BOMBAY IS READY, I'M JUST WAITING FOR THE ICE TO TURN UP 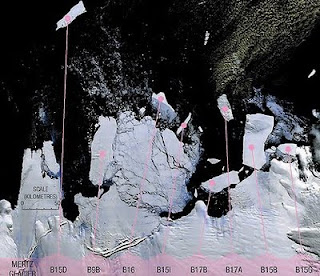 This is the break-up of the Ross Ice shelf in Antarctica in 2000. Usually the iceberg would be caught in the Antarctic Circumpolar Current but the 87 square miles (only a third of its former size) of ice named B17B was pushed north and is now floating towards Western Australia. 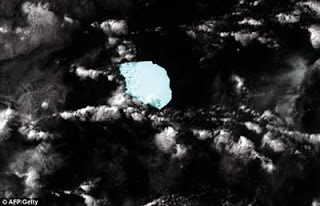 B17B had broken into two smaller pieces and the larger has survived in the open ocean for about a year. It is expected to break into even smaller pieces as it moves into warmer waters. The ice shelves are not part of the Antartic mainland, they float around the edges of the continent but they more they melt and break up, the faster the glacial ice flows out from the centre of the land/ice mass. 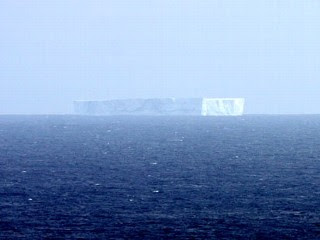 According to scientists the berg is moving at about one knot a day. New Zealand recently issued a shipping alert after a flotilla of icebergs was seen heading toward the South Island but they drifted away to the east. Seven ice shelves have broken up in 20 years due to the warming of the ocean currents around Antarctica. While B17B has been described as a once in a century event now, in the future it may just become commonplace for bergs to be seen this near to Australia.
It reminds me of a novel written by Ken Follett called "Ice" which was a very good read. It seems a shame we have no way of throwing a tow rope onto this chunk of frozen antidote to our drought.

Don't wait for the berg, check your freezer. You can always buy more Bombay when the berg finally gets here.

Would be interesting to know how much of the melt is due to climate change through man-made measures and how much is due to the emergence of multiple under-sea volcanoes, some of which have been detected down that neck of the woods.
Bugger it, pour me a glass, too, we've got land in Central Vic we can pitch a tent on to escape the rising tides ;)

River, I was kind of hoping that NASA would be charting its journey until it melted to see how far towards us it gets.

Jayne, the melting is due to ocean currents changing, their direction and their temperature. There have always been under-sea volcanoes, we just didn't know about them but the ocean is warming from the top down and it's our oceans that drive this world.

One day the CEO of a Nooport junkyard found a loquat on the beach what had come from china. He took it home, planted it, and it became a loquat tree. He had a bite of one and straight away his cancer was gone and the good looking lady next door invited him in for a root. That's when he found out he now had the biggest hard-on in history. Then his sisster ate one and got bigger tits. What's more she went from a size 24 down to a size ten in two days. They both became irrestible to the opposite sex (then his postman tried one and got irrestible to the same sex which is what he wanted and he didn't put letters in the wrong boxes anymoore). Their luck had changed. They'd got smarter. So being good looking now with more brains the three of them got togethor and made tablets out of these amazing loquats. Now they are sharing this amazing cure for everything for just $99.99 for a box of 200 tablets (you'll only need one tablet but can give the rest away to all the new friends you'll have since becoming so popular. Loquat Love also cures unpopularity!). Send the money here: P.O. Box 797, Spotswood.
Credit card is okay but cash is nicer.

Here's our promisse: if you haven't got a bigger dick in two days and still got cancer we will give you the money back. Money is not important, your health is important; deleting this from your blog could be bad for it.

If you know what we mean.

Goodness, the spam is getting in everywhere, must be the north wind.
Anyway I'll leave dear loquat love up in case Robbert would like to take up their offer or maybe Lord Sedgwick, who according to rumour could use a dose or two. (you notice I didn't name women, gullible we ain't)

Do you think I'm stupid?

I'll wait till Sedgwick buys them and get one off him.

Ha Ha, Loquat Love....
I like loquats, I pinch them off the neighbours trees and eat them on the way home from shopping etc, then I plant the seeds. They've grown, but never yet given me any fruit.

Snow dropper and locquat stealer, Robbbert is there no end to your talents?