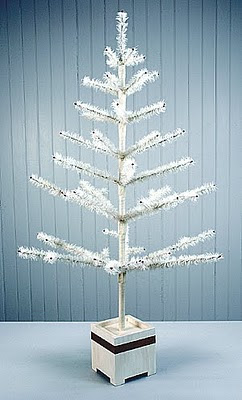 This was the first artificial Christmas tree and they were originally made in Germany as early as 1845. By the mid-19th century, decorated trees were more popular than ever; however, in Germany deforestation was widespread, especially during the Christmas holiday season. It had become the fashion to chop off the tip off a large Fir tree to use as a Christmas tree; however, this practice prevented the tree from growing taller and thus made it useless as a timber tree. Statutes were enacted to limit people from having more than one tree, hence protecting the forests. With the introduction of the "goosefeather" feather tree, this problem was resolved.

Goose feathers were plentiful and these feather trees began to be produced as a cottage industry as the alternative to cutting a live tree. The goose feather tree became the first artificial Christmas tree. Metal wire or sticks were covered with goose, turkey, ostrich or swan feathers. The feather sticks were drilled into a larger one to resemble the branches on a tree.
The trees were made to resemble the locally growing white pines of the German forest and the composition "berries" on the end of every branch tip were made to hold lit candles. 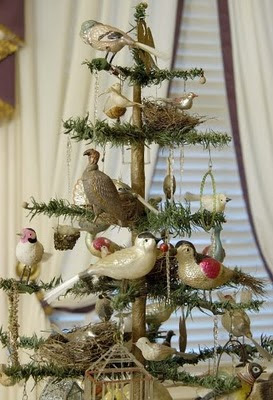 The wide spaced branches of feathers, sometimes dyed green, were made to show off the ornaments and I love that this tree is full of birds. Now I've been wanting to make a feather tree for years and I collect feathers every time I'm out walking. The small trees look good in corners where a big tree dominates a room. My tinsel tree is still sitting in the wardrobe for another year but I have a Father Christmas on the mantle.
**********************************************************
I tried to make a phone call to mum this morning since the Bouvier sisters are calling this afternoon. Their hand held phone is fritzed again for the third time and guess whose mother has done it in for the third time. The first time they managed to get it back, second time, it cost $200 and now it looks as though they're up for a new one, cost $1300. I should have told them that if she was given anything remotely buggerupable to make sure she had an instruction sheet with the off button circled.
I'd just hung up my phone when I realized that mum's handheld phone is on the floor, saved from the family chuckers when I was packing up. It's all cleaned up, battery in and just needs to be charged but the phone jack part is missing and I think it's in another box that hasn't arrived yet. At least with this on the go, the nurses' station can keep the other one out of mum's hands.
Do I have to trumpet again to this family, don't throw anything away that might be useful?
Posted by JahTeh at 3:19 pm

My mum always had little clip on birds on her christmas trees. I always hated them. I don't know why.

River, were they the sort of silvery tinny kind? I didn't like those but mum had 4 red feather ones which I loved.

We don't have to clip birds to the trees round here at the moment. They're all frozen to 'em anyway.

No, they were the feathered kind, very pretty, but I couldn't stand them. There has to be a story behind that, but my memory is blank there.

I've decorated a tree for you: vanilla slices, lamingtons, chocolate eclairs and packets of tim tams, with a BOSTON BUN on top (I had a pavlova there but it fell down and the dog ate it).

Stencil then tattoo it to your sisters forehead.
Failing that, staple guns are always handy.

Hullo me little darlins (you dirty bums) don't you go all sunglassed on me and sit outside trendy latte shops, those dumps were secondhand dealers not long ago and still smell of deceased estate, okay? You've all failed to find what you wanted in romance, the old in and out closed the show. It's a matter of different intentions: women give up at forty, blokes go into old age still wanting a bigger cock.

Your Lordship, I knew it was going to be a bad winter when the Mail published that photo of the oversized robin. Anyway I thought it didn't snow in Fleetwood.

River, repressed memories are bad for you. Unfortunately my memories of Christmas are all too clear, I wish I could forget most of them.

Robbert, you swine. I'm reading this at 2.05 in the morning with nary a sweetie in the house.

Jayne, see next post up and tell me if there's anything you need. I haven't put everything there so if you have need of anything, I might be able to help.

Robbert, 60 is the new 40 for women and we never give up, we just become more realistic about ourselves and have the wisdom to know size doesn't matter except in the matter of a pavlova when big is better.