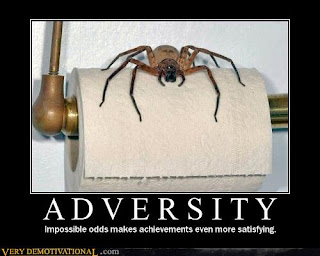 I shouldn't do that to HB who will now really need a bex and a good lie down.
I have two of these.
One in the letter box but he's eating the black spiders so he's safe.
The other is living in the old fridge out the back and that's only been there a week.
I found him when he ran over my hand when I was looking for the cat last night and did I need oxygen after that.
Fortunately I had the torch to see where he ended up when I flung him into space.
I had the torch because I couldn't find the cat.
One whole hour I searched for that flaming cat, in the dark, with a torch....and spiders.
I have five Orb spiders, five that I found.
Two in the apple tree branches.
One going from the outside of the apple tree to the spouting on the house so there's no going up the path to get washing off the line after 3 o'clock in the afternoon.
Another is still spinning from my bedroom window to the Mandarin tree.
So with my trusty Dolphin Lantern I walked around the tree to get up the side of the house.
And I thought the others were big.
This was the Godzilla of Orbs.
The web went from the Mandarin tree to the fence and down to the ground.
So realizing I was surrounded by trees, I swung the light in every direction before tiptoe-ing at a ripping pace to the safety of home sweet home.
Bloody cat sauntered in 20 minutes later and parked itself on my bed in front of the fan.
Posted by JahTeh at 4:49 pm

I have a baby one of these in my house, outside my bedroom door. Not sure why it's there, it's not like the insect population is huge in that spot!
My cat saunters nonchalantly in after me searching and calling for her. It's feline selective deafness and it drives me manic at times!

One that's turned the pencil pine closest to our shed (where my faithful treadmill lives) into a cobwebby apartment tower of doom and the other has fastened itself to Skipper the rabbit's hutch.

Neither has run over my hand. Yet..

I love the webs spun by orb spiders, they're beautiful to look at especially at dawn when they're sparkling with dew or raindrops. Not so nice to accidentally walk through though, they do tend to stick to the skin. I wish my orb would come back, I kind of miss him. I have plenty of redbacks, but they can get lost as far as I'm concerned. I don't mind huntsmans either, but haven't seen any around here lately. Probably the birds have got them. About the cat? Now you know never to go searching for him. they'll always turn up.

Fen, babies have a habit of growing up and I'll always said, the first rule of divorce is learning to take out your own spiders. The cat has been known to come in with a huntsman on its head and the family standing around not game to hit it or spray it. They rang me so I told them to put them both outside, together until one got rid of the other.

Kath, it's strange because I thought that Orbs were autumn spiders not summer. Like River said the webs look beautiful with the dew on them, that's autumn dew.
They're not dangerous, it's just that the web is so strong and you can really get tangled in it.

River, I haven't seen Orbs for over 20 years so I find it a bit disconcerting to find myself overrun with spiders of all descriptions. I just wonder what they're catching in those webs.

I thought the first rule of divorce was grab what you can. I had a mighty wrestle with my missus over our worm-eaten piano, no way was she getting that! I needed it to charm future prospects.

-Robert.
("Moon River" always gets them)

Robbert, I was remarkably generous about the divorce, I got the house, he got the money and blondie. I have just made the decision to toss to the op-shop his 21st present to me, anyone for Persian brass goblets, never used because they're completely useless?

What do you mean you were generous, what did you want, the blonde?

"I have two of these.
One in the letter box."

That'll be the one in the photograph, I take it, that you didn't evict properly before using the bog roll?

Oh fabulous. I don't need a bex, I need a bloody mogadon.

Poetess Alison Croggon, the bird who inspired the extra b in Robbert, and who booted him out of her poetry workshop at Willy Literary Festival for laughing, lifts her skirts to skitter 485 km outside Adelaide to a burg called Bilnman where she attacks the population of 25 (22 yokels, a horse, and two cattle dogs) with her poemmms. True.

Darlings, I wouldn't miss it for the world.

Thats a beauty of a spider...
Don't you just love it how cats sit outside the door to be let in and then they don't come in...so you shut the door and they still sit there...I have even turned my head away so she can't see my face to try and trick her - but she always does it in her own good time

The place is called Blinman, not Bilnman (my eyes are shot, Miss Croggon still looks about 39), it was a ghost town, but not anymore, her poemmms frightened them away.

Robbert, it was generous, at the time he had more money than the house was worth but changed now.
Why didn't they ask you to be on the poet show?

Jayne, the wild life around here at the moment is just ridiculous. I lift everything up very carefully.

Fleetwood, if I was trapped in a toilet with one of these, you'd have to send a truckload of toilet rolls. They move so fast, if they were slow it wouldn't be so bad at least give you time to aim a brick.

HB, what an incentive for that exhausting run you have planned. A picture on a stick but not in front but behind you. Would you like an Orb spider I have plenty?

Therese, it's back on the bed again and not on its rug but on the lilac doona. Anywhere but its rug apparently.

The Ali and Frazier stoush is on now.

Marvellous series, I've been watching it for months.

Robbert, I left the hot docs for this week. The fight scene does nothing for me. I know there's skill involved but also blood and brain damage.

Thriller in Manilla covers the board. It isn't just about boxing, it's about sacrifice. Think of an athlete hitting the tape, head back, mouth gasping....Thousands of bloggers want to be artists, most are too lazy.

Robbert, I still couldn't watch it.
Now if it were you and Miss Croggon, that would be quite a match. Bare knuckles naturally.

I've worked out a better way to get back at her.
It's called: The Croggin Papers.