The famous Hope Diamond, the stone of legend and curse. It was thought to be originally from India and at one time was part of the Crown Jewells of France, known as the "French Blue". It disappeared during the Revolution turning up 20 years later, cut down to this size.

It is supposed to be cursed but it's generally thought that Pierre Cartier played this up when trying to sell the jewell to Evalyn Walsh McLean. She liked gems with a history but she didn't like the setting so after the sale, the diamond was mounted as a headpiece on a three tiered circlet of large diamonds. Later it was made into a pendant and attached to the diamond necklace as it is today. It was owned by the Hope family for most of the 19th Century.
If it wasn't cursed then Evalyn was certainly an unlucky woman. Her husband left her and died in an asylum and two of her children died young.

Jeweller Harry Winston bought the diamond after her death in 1947 and donated it to the Smithsonian in 1958. Last year, for the fiftieth anniversary of that donation, the diamond was removed from it's setting. 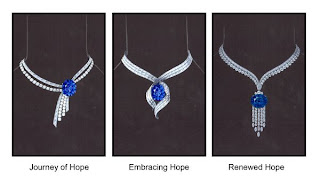 Three new modern settings were drafted and the final selection was decided by public voting. It will be unveiled in April, 2010.


The first design by Maurice Galli is called a Journey of Hope symbolizing the American experience of uniting Hope and Opportunity.
Gallli's second design, Embracing Hope, has three ribbon rows of of baguette diamonds hugging the Hope in the centre.
Rie Yatsuki created the third design, Renewed Hope. The dangling diamonds recall the flow of water in nature.
After a limited time in its new setting, the Hope will be returned to its heritage setting. 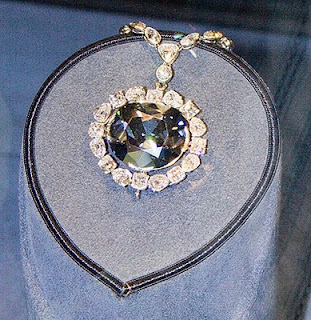 The diamond was thought to be unique in emanating a strong reddish-orange glow after being exposed to ultra violet light. Researchers discovered that almost all blue diamonds glow after exposure. These blue diamonds get their colour from traces of Boron and this interacts with nitrogen and UV to give the stones a glow of bluish-green overlaying a red phosphorescence.

With the difference between colour and duration of glow, researchers can use this as a diamond fingerprint to distinguish between fake and real stones. It could track stolen diamonds even if they've been re-cut.


The Hope Diamond weighs 45.52 carats.
It has a length of 25.60mm, a width of 21.78mm and depth of 12.00mm.
It's a cushion cut antique brilliant with a faceted girdle and extra facets on the pavillion.
Its clarity classification is VS1 with a whitish graining.
Its colour is a fancy dark grayish blue.
In its pendant shape, it is surrounded by 16 white pear-shaped and cushion cut diamonds. The necklace chain contains 45 white diamonds.
Posted by JahTeh at 4:01 pm

It's a beautiful, beautiful diamond. I love the new settings that have been designed for it, especially the renewed hope one. after the Hope is returned to it's original setting I hope someone makes those new designs with a lesser diamond or even a sapphire. I'd love to see them with a deep red garnet as well.

I have a friend who wears a large diamond ring. When she is out she turns the stone inwards into the palm of her hand and clenches her fist for safe keeping.

It seems sad to have to hide something so beautiful. I prefer jewelery that does not cause me heart ache, should I lose it beyond the loss of pieces that reflect personal meaning.

I suppose we need things like diamonds though to give something grand to which we might aspire.

River, I'm inclined to the second one because I love baguette diamonds but then the third has the waterfall effect. Not a deep red garnet but an Australian Rhodolite Garnet which is a deep red with a pink tinge, very pretty.

Elisabeth, I am guilty of not wearing my pretties because I'm not going anywhere but shopping so I've decided to stop and bling up.
Since I've bought most of my own jewells, I'd hate to lose any of them. My wedding and engagement ring I wear more now than when I was married but that's because now they're really mine. I spent Saturday morning in the gem shop just drooling up and down the counters at the unset gems.

they are ALL Hope Diamonds to me - I hope to get one sometime ...

He should have just stuck it in the middle of a dog turd then.

Well if you really want the thing I'll pinch it for you, then we'll go to MacDonalds to show it off.

I'm junking one of my cars today at the wreckers. I'd take my daughter with me for a better deal but the proprietor there is an Aussie, it only works with wogs.

Hullo my little darling sweetiepies the day ends and the day begins. Wooh! Philosophical!
Autumn. How depressing. Sweetiepies leaving Brunswick Street early, close the curtains, goodbye. What do they talk about?

Autumn
How depressing
Sweetiepies leaving Brunswick Street early
Close the curtains
Goodbye.
What do they talk about?

@R.H.; Autumn depressing? No no no. I love autumn. Sunny days, cooler nights, perfect weather for walking and sleeping. without melting (summer) or freezing (winter).

I LOVE the 'soft' air of April ... and the Golden Delicious apple season.

Fleetwood, perhaps it should have been bullet shaped diamonds.

River, I love Autumn too but I have a feeling that March might still have some hot weather in store. We get rid of daylight saving.

Well pardon me River chick, warm Autumn days have the chill already in them, and later you realise, so does love. When I'm happiest I feel the creep, the ice down my spine.

When I'm happiest I feel the creep
The ice down my spine.
Melancholy
Tells me true.
Yes
This is love.

A poet is never bashful, he makes a fool of himself; for inner joy.