The Finnish Air Force has released images showing the effects of volcanic dust ingestion from inside the engines of a Boeing F-18 Hornet fighter, while it prepares to make inspections on several additional aircraft.

Five of the air force’s Hornets were involved in a training exercise on the morning of 15 April, just hours before the imposition of airspace restrictions due to the ash cloud spreading from a major volcanic eruption in Iceland.

One aircraft’s engines have been inspected so far using a boroscope, with melted ash clearly visible on its inside surface. The air force decided to release the images to show the potentially damaging effects of current flight activities, says chief information officer Joni Malkamäki 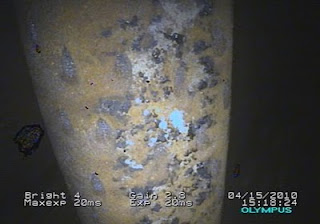 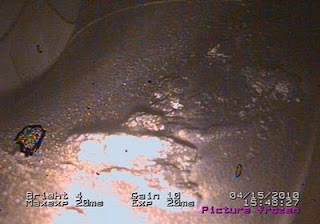 Now along with rock particles in the ash clouds, volcanic glass droplets are also forming. The airlines are asking why they can't fly beneath the ash cloud, well probably because the sky is falling. As usual it comes down to money. How much are they loosing by staying on the ground against how much extra in fuel costs to fly lower altitudes. I think I'll be like Jane and park the broom in the shed and walk. 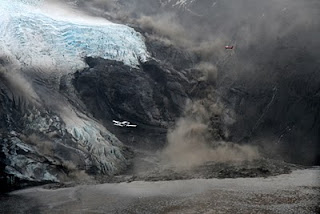 If you want to know how big that glacier is just look at the planes going past. That blue at the top is cascading melt water from the eruption. There have been amazing photographs taken of this eruption and it hasn't stopped yet.