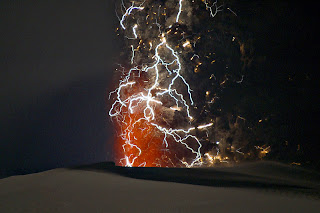 I keep finding the most fantastic photographs but
Marco Fulle definitely has the best of the lot. So go over there and stop me posting more.
That lightning display is even better than the Chaiten photos of last year.
Posted by JahTeh at 6:18 pm

I've told you, don't put up these bloody geographic postings, you won't get comments, okay?

Wake up to yourself.

They are dreary -worse than 'The Way of the (fucking) Pear'.

I missed you at the Willy Lit Festival this weekend. Old Moll Catherine Deveny lifted her skirt and two bank managers fell out.

That's the trouble with being a clone, you forget where you've put things.

Robbert, it's current affairs and it's going to affect the Brit election and economics and the pictures are great. Nobody got photos of Krakatoa or the Titanic going down. Anyway I've been crook so you'll have to make do.

Jayne, I watched it coming across the bay in the afternoon and I thought it would miss us until the first crack of doom. Even the cat opened one eye.
I got a lot of tips on flint knapping last night and I had visions of the Feral Beast out looking for a chert pit today. They're a bit of a humourless lot though, I ended up waiting for a gator attack.

I love lightning shots. I keep trying to catch them with my dinky little camera and I did once get one, but it was years ago before my digital and the developed photo is long since lost. Also, it wasn't that good.

Only kidding (don't you know).

Of course you are and just for you, I'll put up another shot.