The jungle or politics, it's all the same 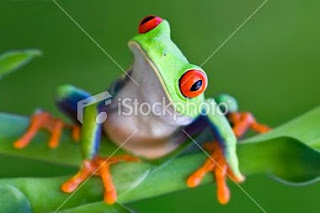 Researcher, Dr. Greg Johnston from Flinders University and Adelaide Zoo has been studying the rold of bright colours in frog breeding behaviour in the Panamanian rainforest.

When the frogs strike a particular pose that displays the bright colours on the side of their body, they start shaking the branch they're on. What Dr. Johnston noticed was whenever they displayed this behaviour, they were also doing what looked, to him, like little tantrums.

The research team also used a miniature seisomograph to measure the vigrations made by the frogs to make sure they were not the product of wind or some other random movement.

Johnston and colleagues set up contests between male frogs and found they interchanged vibrations until one frog finally gave up, or the two had a fight to determine who would stay. They also put together an experiment using a robot frog to play back vibrations to male frogs in the field. They reacted to the robot as if it was a competing frog.

I'm trying not to say it but I can't help myself, isn't that so male, flashy, tantrums and sex.

It was once illegal for women to falsify their looks with cosmetics, hair dyes etc, to deceive a suitor. They could be prosecuted for it.
Miss Gillard is grey-haired, we all know that. Or maybe her defacto doesn't know it. Let's be frank, it would be bag over the head anyway, she's not much of a woman.

Uh huh, Oh, I'm hearin' yo, sista!
"Strike a pose..." has Madge been channeling male frogs all this time?

@R.H. Bag over the head? Really? Looks aren't everything.
Or, just turn the light out.

oh i love these little guys, i'm such a frog person!
I haven't emailed you yet, I'm in total disarray at home and I can't access my email from work. Never fear, I will do, it may just take me a while as I'm not sure how long it will take to get my internet reconnected. :)

Robbert, would that be in Restoration days? You know when the men wore long curled wigs, face powder, rouge and heart shaped spots to hide their pox marks.

Jayne, probably eating them as well.

River, ignore him, he has a paper bag concession but footballers won't wear them.

Fen, I'm still in disarray after moving mum's house 6 months ago. Looking in the front room gives me palpitations.

River, thanks for the laugh, you're becoming a funny bird.
I see Miss Jahteh's influence.

No, it was during Charles the first's reign, before the Puritans chopped his head off.
Charles the second (the Restoration)favoured lots of tit, much like today's fashion.
Miss Gillard, scrawny, titless, is an Elizabeth the first: ruthless, humourless, severe.

Good Heavens, just shows how you can see things wrongly, she's not bad looking after all.

Caligula made his horse a Consul, I've made my dog prime minister, he is now selecting his cabinet: I do wish he'd stop pissing on the furniture.

Robert is being a rather naughty boy of late on blogs - is this his version of a froggy tantie? :)

If it works, yes.

Robbert, it isn't working and if it wasn't so cold, the sisterhood would be dancing around in the dark of the moon and you would end up a frog and not a pretty one, possibly just a cane toad.

Kath, he's probably on a sugar high just from thinking how sweet he is.

it is very soggy here and I can hear plenty of frogs. good thing the chooks are sleeping instead of snacking on them.
Thanks to Dr. Cat of the Still Life, I give you FROGS alright. YUM