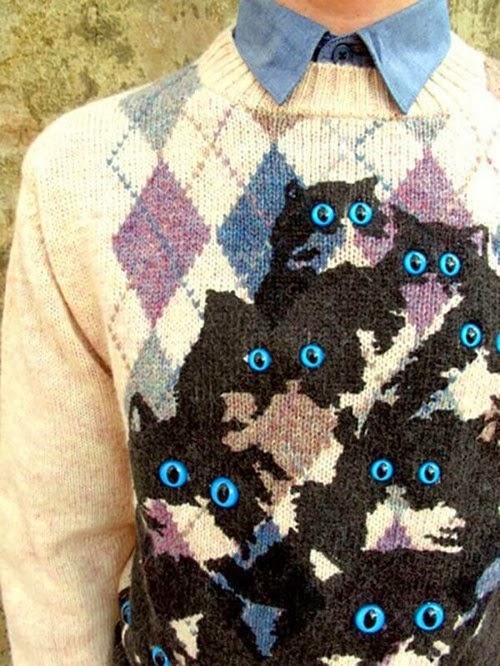 You know the one, it's something o'clock and there's no-one in the place except you and me.
It came to mind as I'm sitting here at 2 in the morning laughing hysterically at that cat jumper.
It must be the heat.  The cat is in the lounge just below fan height, I'm in the study with fan and shortly must try to sleep with the fan on in the bedroom. The front door is open but the smell of smoke is wafting in. I barely slept last night, put the air-con on this morning and fell asleep in the chair over breakfast. I don't know how I sleep sitting up without drifting to one side or the other and breaking my neck.
I have been watching tv ads for 'back to school' and wondering how I survived with no water bottle, lunch pack with ice cooler, large hat and some one to drive me to school. I don't know why my generation hasn't all ended up with kidney failure when we only got to drink out of the communal fountains, before class, morning break, lunch and afternoon break. If you were at the back of the line and the bell went, bad luck, it was back to the classroom of no air-con just heat exhaustion.
The joy of a paper bag full of curling sandwiches, hot oranges or browning apples. If I missed the bus it was a hell of a walk home unless I took the short cut over the railway lines which I frequently did. See what this heat is doing, making me relive all the hideous days of my life.
I really should print out that cat jumper and cart it around with me tomorrow, at least that is making me laugh.
Posted by JahTeh at 2:13 am

The cat jumper is a hoot - though even thinking about the word jumper is making me come over all weak.
I am not going to thank you for triggering memories of my school days. Small bottle of milk, dropped off outside the school in the morning in the sun. HAVING to drink them at morning break. The inevitability of first one person and then more being sick.
And tired and soggy tomato sandwiches. And liverwurst sandwiches. There is NOTHING you can swap for a liverwurst sandwich. My father liked them so we all got them. To throw in the bin.

EC, I don't recall anything about my early schooldays that is happy. I really tried hard to but then you just had to mention that curdling milk. I didn't mention that the water taps were usually built onto the back of the toilets, choice in summer. Now wonder they're sending out bowell testing kits for people of my generation since it was only an emergency that would make me use them.

With only gravity feed from a tank, warm water slowly trickled from the bubble taps. There was no question of not putting your mouth on the tap to get a drink. Unfortunately Glad Wrap arrived a little too late for me. The waxed paper never sealed the sandwiches properly. The were either Vegemite or jam.

I remember those school days, drinking from the communal taps, but we had a long trough with 6-8 taps, about four of them throughout the school grounds. My sandwiches, which were almost always plum jam, we warapped in the wax paper the bread loaf came in until it disintegrated, then a new wrapper was retrieved from the bottom drawer. I never, ever drank the school milk, there was always someone else happy to have it.

oops, that should read "were wrapped"
EC liverwurst was a big favourite in our house too, except with me. It's probably very healthy stuff...

Andrew, you mean you never learned the trick of putting you hand around the top and letting the water come up through that? Touch that innuendo and I'll kill you.

River, doesn't trough describe it so well.
Monday's bread was like hardtack since there was no baking on the weekends.

Peck's Paste on the sandwiches,Squashed sardines, white Tip Top bread. A floury apple or an orange that was not yet mouldy.

A treat was a canteen lunch - a pie with sauce and a meringue for one shilling.

Yes, we walked the mile to school, picking up school mates on the way. If it was hot on the way home we would wet ourselves with someone's garden hose. In the winter it was great fun to crack the frost beneath your feet and arrive at school with cold, wet feet.

Golly, that's how it was. Most kids just drank the cream from those little bottles and put them back in the crate, some kids never touched them at all - tremendous waste, but that's government initiative; well-meant but badly organised. I was at Armadale state from Grades 4-6. In Grade six I was given the job of ringing the school bell, if I kept hold of the rope after pulling it I got lifted off my feet: little fat RH. I had to repeat year five and the pommy girl from the local milk bar caught up with me. She wrote me little love notes during class and chased me after school. And I was terrified whenever she cornered me because I thought that if I admitted I was interested she might lose interest herself. Later of course I would discover the alternative use for my doodle and it would ruin everything, kill romance.

DK, what luxury, you had a canteen! I'd forgotten Peck's Paste and you could always tell who had an egg sandwich by the distance to the nearest person. White bread and they didn't even have the thicker toast slices then. I tell you if the government took a survey of 60 year old's school diet we'd all know why this bracket has diabetes.
As for the walking, primary school was 2 miles from home and secondary school had to be 3 and a half so was I a slim petite little thing from all that walking, not on your life.

Robbert, I look back at the bad boys I knew then and all of them had some form of dyslexia so were considered dumb as a door post and not worth teaching so they acted up. Even then I had an acid tongue so they were put next to me as a punishment. I was so happy to be sent to an all girl secondary school.
They worry about nits now but back then it was also ringworm, impetigo and warts. The walk of shame was coming to school with purple spots (gentian violet) on the school sores.

What does it say about me if I would wear that cat jumper with great pride? Laughing! :-D

It wasn't dyslexia, it was home life: drunks: scum. Should have been gassed.

The jumper made me laugh too. Another image which triggered convulsions was the Christmas Tree composed of all black cats with mad yellow eyes.
The DK school experience above is the same as my own. Walking for miles through dust or puddles. I still cannot drink milk at all, but the worst thing the Victorian Education Department did to me was the forced familiarity with Man Shy and The Loaded Dog. Still not over that either.
(and nobody above mentioned the vile toilet paper)

Ann O'Dyne; I'd forgotten the toilet paper. Little squares of scratchy stuff, shiny on one side, totally non-absorbent.

Cassandra, it would mean you have an independent mind and great style. I just love the thing. I can imagine it as a fab doona cover with matching pillows.

Robbert, in some cases I'd agree with that but I can look back now and see the signs of dyslexia. One boy grew up to run a successful business but couldn't read and signing his name was about all the writing he did. His parents were notorious drunks but his brother and sister were quite literate.

Annie O, I agree with the reading material which traumatized me into never touching a book that had an animal in it. The Silver Brumby had me hysterical. I want to hurl when I see anybody drink a huge glass of milk.
And River is right about the shiny and thin bloody paper, one slip and there went the fingers which would have been more useful in the first place. I never went unless I was absolutely desperate.