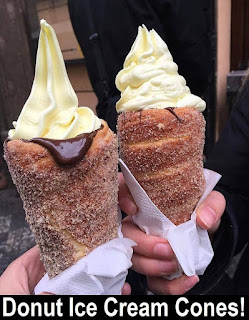 It HAS been warmer up here. Trust me.
We get those people calling here too, but there accents are decidedly Asian. Despite their name being Brian or Peter.
And a very happy birthday for Sunday. Chocolate and gin filled.

So, do you want the donut ice cream cones as well as, or instead of, birthday cake? and where do I buy them?
I have a theory why mother is feeling cold: it's because she is lying there doing nothing, when everyone knows movement will warm the body. Tell her to jog around the block a time or two. She'll be toasty in no time. Ha Ha.

To verify this theory, I'll tell you that when I'm sitting here at my computer and the only thing moving is the hand that brings my coffee mug to my mouth, I get chilly. Let me get up and walk to the bathroom, then to the kitchen to make toast and I'm feeling much warmer, even before I eat the toast.

EC, how can you say that when you've been out in nought degrees photographing soap bubbles. I have a beauty to send to you. It will only be happy if my granddaughter decides to tell me she's pregnant as a birthday surprise.

River, she's having trouble controlling her body temperature, she can be cold one minute and the next has her fan out because she's burning hot. This is not a good sign and has been much worse since the last stint in ICU. She's not really hungry either but a lemon meringue eclair (tiny) picked her up a bit and didn't do me any harm either. That was another genius idea, delicious and easy to handle.

While I think Windows 10 has some improvements over Windows 7, XP was a game changer. I am so tired of calls on the land line from the Department of Inland Revenue. I'm gonna be gaoled at any minute of the clock, you know. Bring me bottles of Scotch when you visit, please.

Greetings to my little sweetie-pies, paddle-pops, and mincing pussy cats in public toilets, hot cinnamon doughnuts are my favourite, I eat six of them in one go. My next favourite is a pizza with hot salami, olives and anchovies. After that I'll down nearly a whole bottle of Coles lemonade (89c). When I was a boy, cold dripping (fat from frying) put on bread was a regular, it was kept in a tin beside the gas stove, and the dark bits in it were very tasty. For breakfast we had bread and milk: broken bits of bread covered in milk and sugar. These things were good at the time, but then in my last year at primary school a kid gave me a peanut butter sandwich, someone else got a piece too, and said, "I don't know what it is, but it's very good." Yes indeed. It's never been as good since.

Darlings, paddle-pops, mincing pussy cats, I'm devastated by the realisation that I've done nothing to justify Footscray hospital prolonging my life. I've achieved bugger all since. But I will, I'll get going soon. Hospital was a puzzle, a fascinating trip. I took myself on tour, up and down the elevators, round and round the corridors, out into the carpark for a smoke and with them all looking for me, these professors. I entered the cafeteria, filling my dressing gown with sugar packets because there wasn't enough at meal times. I strolled the wards, having a joke and a laugh with complete strangers, yelling "G'day mate," into all the rooms. Darlings, it was just so marvellous to be on the go and off a machine, tubes detached. In the end after passing it a dozen times I entered the little chapel, just to come down a bit. That's how you get balance. Life isn't one big laugh, those who think so have given up.

I'm smiling here at RH doing the hospital rounds, shouting G'Day Mate into all the rooms. What a cheer up that would have been for them!

Andrew, why am I getting calls about investing my incredible wealth into time-share units and retirment villages. It's why I don't trust this new Census coming our way and how wonderful to think every person in the land has a computer to fill it out. I want a paper one and I'm still deciding what my religion is for this one.

Robbert, how cheery to visit, I'm sure if I'd been on enough morphine I'd have enjoyed a chat. I also nick sugar packets. I know Peanut Butter was invented by a black scientist in America but just when did we get it here?

What a wowser society, those piddling little sachets wouldn't have half a teaspoon in them. Hey!- it's SUGAR, you bums!- not fkn gold dust!
I don't know when peanut butter arrived here, I know my first taste of it was an experience, still vivid. And listen, don't poke fun at morphine, it could be a way for us to discover we have everything in common.

Robbert, I only have sugar on a cappuccino, if the foam is fresh and thick it sits on top, and I love drinking the coffee through it. I always carry a few packets in my purse.
I remember my first real American donut, it was divine, nothing like the sweetie crap we get now and going right back to my food memory, Swallow's Peach ice-cream, nothing like it since.
Peanut butter is way down on the list and I can never work out why Americans eat peanut butter and jelly (Aus-jam) sandwiches.
Never touch Ben and Jerry's Ice-cream, diabetes in a carton, ghastly stuff and you know me and ice-cream.

re your "it's why I don't trust this new Census coming our way and how wonderful to think every person in the land has a computer to fill it out. I want a paper one and I'm still deciding what my religion is for this one." LET US ALL put 'Muslim' and frighten the hell outta the gubmint.
I still have the form from the previous census. nobody came to pick it up.
Do the collectors settle into their comfy chairs and read them at the end of their day?
Her-Sun yesterday wrote "Aged fear losing their census". very amusing subbie but the article said getting a paper form has been made so difficult - quoting a 12 digit number over the phone, that old bats will give up. We are all getting 'an instruction letter' - can't wait for all the Twitter comments on that. luv youse all, and Get Well Soon RH.

Annie, it's the 31st July and we have 9 days to get that paper so they are making it difficult for us.
What happens if everyone turns on the computer at the same time, black out?
I want my paper even if I haven't decided to be Jedi, Druid or Fullblood this year.
I really hope there is a section on how I feel about politicians.

oh yes you are so right - the mass logon will crash the WWW.
I'm out here on a road with no garbage collection, streetlights or traffic lights within 45 kms and yet the paper form was delivered yesterday by a very nice man who then proceeded to photograph with a cellphone the evidence that it had been delivered, then he had dropdown lists on his screen which he variously chose. It all looked to me like having a wide margin for error. canardly wait for C-Day

oh god PS HAPPY the 31st BIRTHDAY DARLING - ONLY DO WHAT YOU WANT TO DO. mwah mwah